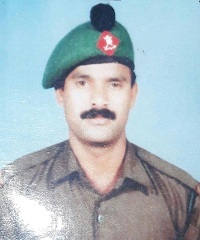 Naik Shivananda hailed from Belatanahalli village of Gundulpete Taluk in Chamarajanagar district of Karnataka. Son of Shri Basappa and Smt Gurumallamma, Naik Shivananda was born on 2nd September 1972. The youngest among four siblings,he completed his graduation.in Chamrajnagar, in the year 1997. Later he got selected to join the army cleared army and was recruited into 16 Madras battalion of the Madras regiment, one of the well known infantry regiments of Indian Army.

After completing his initial training, he served in various operational areas along with his unit. After serving for a couple of years, Naik Shivananda got married to Ms Suvarana in the year 2003 and the couple had a son Rithwiknanda and daughter Susheela.

During 2006, Naik Shivanada ‘s unit was deployed in the Siachen Glacier in Ladakh. The unit was deployed in one of the most remote parts of the glacier and remained inaccessible during winter. The troops besides manning designated posts also operated regular patrols to monitor the area along the border. On Feb 20, 2006, the glacier in the mountainous northern region of the Kashmir valley received heavy snowfall resulting in avalanches in the area. On that day Naik Shivanada was part of the patrol team carrying out the assigned task in the rugged and inhospitable terrain.While the patrol was on its way, it got struck by an avalanche and Naik Shivanada got swept away.The Army launched concerted efforts and pressed the specially equipped Avalanche Rescue Teams into service to search for the missing soldier.

The soldiers faced extreme risks in manning the inhospitable terrain at heights of 19,000 feet under extreme weather conditions on the world’s highest battlefield. Avalanches usually took place due to the accumulation of snow and were triggered by morning sunlight. In other cases, when the slope of accumulated snow was between 60 to 80 degrees, the instability led to an avalanche. Although the Army had a unit of the Snow Avalanche Study Establishment (SASE) in Jammu and Kashmir, with several observatories at various locations to issue warnings and alerts to the Army formations and units, it could not detect this avalanche. Despite unstinted efforts the rescue team could not locate Naik Shivanada. Eventually the body of  Naik Shivananda was recovered after five days of search on 25 Feb 2006. Naik Shivananda was a valiant and committed soldier who laid down his life in the service of the nation.