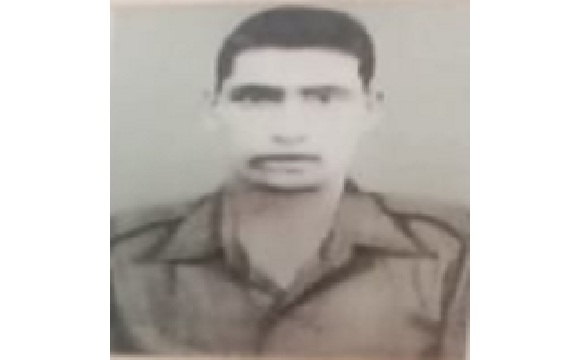 Naik Shiv Kumar Singh hailed from Richhapura village in Jaitpur tehsil of Agra district in Uttar Pradesh and was born on 22 Jun 1947. Son of Shri Bhagwan Singh and Smt Bitto Devi, Nk Shiv Kumar Singh joined the Army in the year 1965 at the age of 18 years. He was recruited into 15 Grenadiers battalion of the Grenadiers Regiment, an infantry Regiment well known for its fearless soldiers.

As a first assignment, Naik Shiv Kumar was posted to the north eastern border and served there till November 1969.  Thereafter he was sent to serve on the western border. After serving for sometime he got married to Ms Sushila Devi and the couple had a son Vineet Kumar. Naik Shiv Kumar was a keen sportsman too and took active part in unit sports activities. By 1971 he had served for about 6 years in various operational areas with different terrain and operational conditions.

During the 1971 Indo-Pak war, Nk Shiv Kumar Singh’s unit was deployed in the Shakargarh sector on the western sector. The war broke out on 03 Dec 1971  and by the 10th Dec, the battle on the western front had become very fierce with fast-changing battle lines. As per the progress of the war, the area commander planned an attack on the enemy positions in the Har Khurd village in Shakargarh sector on the night of 10th Dec. The "B" Company of 15 Grenadiers was tasked to launch an attack on enemy positions and capture Har Khurd village. Nk Shiv Kumar Singh was part of the company that was tasked for this operation.

As the attack was launched by Nk Shiv Kumar Singh and his comrades, it faced stiff resistance from the enemy forces.  An enemy Light Machine Gun from a nearby bunker was posing a serious threat and was causing attrition on our side. Having assessed the situation, Nk Shiv Kumar Singh, realized that the enemy LMG had to be silenced somehow to prevent further loss of lives. Nk Shiv Kumar Singh decided to lead a section to neutralize the threat of the enemy LMG. Leading his section of comrades, Nk Shiv Kumar lunged forward and launched a grenade attack on the LMG post. He managed to silence the menacing LMG but while doing so, received a burst of LMG and got severely injured. He later succumbed to his injuries and was martyred. Nk Shiv Kumar Singh was a valiant soldier, who laid down his life at the age of 24 years in the line of his duty.