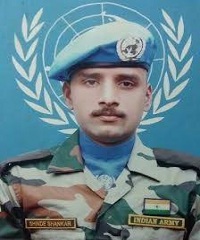 Naik Shinde Shankar Chandrabhan hailed from Bhayale village in Chandwad tehsil of Nashik district in Maharashtra. Coming from a humble agriculture background, 34-year-old Naik Shinde was the younger of two brothers. Fondly called Master for his instructional capabilities, Naik Shinde in his 15 years of service had served in various difficult and hostile places in India as well as abroad as part of UN force. Naik Shinde Shankar Chandrabhan was recruited into the Maratha Light Infantry Regiment and later deputed to serve with the 41 Rashtriya Rifles.

A physically fit having exceptional firing skills, Naik Shinde was also part of the UN peacekeeping mission in Southern Sudan in 2012. Earlier in 2006-07, he was posted in the same RR unit to combat militancy. His elder brother is a junior commissioned officer in the elite Para (Special Forces) battalion of the Indian army.

During 2015-16, Naik Shinde Shankar Chandrabhan was serving with 41 Rashtriya Rifles unit, which was engaged in counter-insurgency operations in J & K.  The unit was operating in Kupwara district which was a terrorist-infested area and offered challenging situations on a regular basis. On 13 Feb 2016, the unit received information from the intelligence sources about the presence of some hardcore terrorists in the area under its control. A decision was taken to launch a search and destroy operation to deal with the dreaded terrorists.

Naik Shinde Shankar Chandrabhan was given the gallantry award “Shaurya Chakra” for his bravery, unyielding spirit and sacrifice. He is survived by his parents, wife and two children.