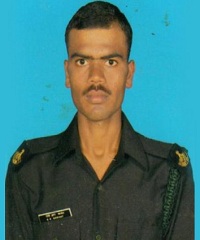 Nk Sawant Sandip Raghunath hailed from Munde village in Karhad tehsil of Satara district in Maharashtra. After completing his school education he joined the army on 28th Sep 2011 at the age of 20 years. He was recruited into 16 MLI of the Maratha Light Infantry regiment, an infantry regiment with a rich history of valour and battle honours. By the year-2019 he had been had put in over 9 years of service in the army and had served in various operational areas in Rajasthan and J&K. After serving for few years Nk Sawant got married to Ms.Smita and the couple had a daughter.

During Dec 2019, Nk Sawant’s unit 16 MLI was deployed in Rajouri district in J&K. The unit troops were manning the forward posts in the Naushera sector along the LOC.The AOR ( Area Of Responsibility) of the battalion was the hotbed of militant activity and the troops had to be on guard at all times. The unit was engaged in operations against the militants on a regular basis. Based on the information that  few terrorists were planning to infiltrate through Khari Thrayat forest in the Naushera sector, it was decided the unit decided to launch an operation to foil that infiltration bid. The soldiers of 33 RR and 16 MLI were made part of the team that was tasked to undertake the operation. Nk Sawant Sandip Raghunath from 16 MLI and Rfn Arjun Thapa from 33 RR and were part of  the team that launched the search & cordon operation in the night of 31st Dec 2019. As the operation was underway the troops soon made contact with the infiltrators who opened fire on being challenged.

A fierce gun battle followed thereafter with a heavy exchange of fire from both sides. Despite the darkness and the thick foliage in the forest, Nk Sawant and his comrades were determined to foil the infiltration bid of the militants. However, during the exchange of fire Nk Sawant and Rfn Arjun Thapa received gunshots and were critically injured. They were shifted to the near by military medical facility but they later succumbed to their injuries and were martyred. Nk Sawant was a dedicated and valiant soldier who laid down his life at the age of 29-years in the line of his duty. Nk Sawant Sandip Raghunath is survived by his parents, wife Mrs. Smita Raghunath and a daughter.