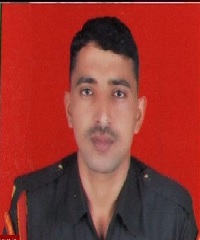 Arm/Regt: Brigade of the Guards,

Naik Satish Kumar hailed from  Bhawani village in Haryana and belonged to Brigade of Guards arm of the Indian army. He was serving with 21 Rashtriya Rifles since 07 April 2015. Naik Satish Kumar was a member of the Army team that launched an operation in a forest of Handwara in Kupwara District on 04 Dec 2015. He displayed extraordinary courage in engaging the terrorists and making the operation successful. For displaying extraordinary courage, commitment beyond the call of duty in eliminating two hardcore terrorists and making the ultimate sacrifice, Naik Satish Kumar was awarded “SHAURYA CHAKRA” posthumously in 2016.

He is survived by wife Pramila, daughter Ritika(10) and son Nitin (8).

Naik Satish Kumar was serving with 21 Rashtriya Rifles since 07 April 2015.

On 04 December 2015, he was commanding a small team as part of the search and destroyed operation in Boban Wastar Forest. Observing speed and stealth, he led his small team to the likely target area, searching the forest cautiously and deliberately. At 1305 hours, Naik Anil was suddenly fired upon by terrorists injuring him. Realizing Naik Anil being hit, Nk Satish Kumar crawled ahead to a fallen tree, engaged and eliminated one terrorist at close range. He then provided Nk Anil first aid and ensured his timely evacuation. Simultaneously, the second hidden terrorist opened fire injuring him on his right leg. Unmindful of his injury, Nk Satish engaged this terrorist and despite profuse bleeding closed in, lobbing two hand grenade towards the terrorist who was still firing and killed him. However, during his assault towards the terrorist, he suffered another gunshot wound and attained martyrdom.