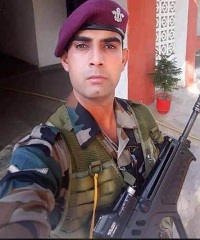 Naik Sandeep Kaliraman was born on 12th Feb 1986 in Atali village of Faridabad district in Haryana. Son of a farmer Shri Nainlal and Smt Kesar, Naik Sandeep had two sisters Urmila & Poonam and a brother Sonu. Naik Sandeep did his primary education from Sir Chotu Ram High School in his village and while studing in class XII he got selected to join the army. He joined the army in the year 2005 at the age of 19 years. He was recruited into 10 Para (SF), the special forces battalion of the Parachute Regiment, an elite regiment of Indian army known for its dare devil operations.

After serving for nearly 6 years Naik Sandeep got married on 8th Mar 2011 to Ms Geeta from Dayalpur village. Later the couple were blessed with 2 sons and a daughter. During his 13 years of service, Naik Sandeep had 3 tenures in the trouble-torn areas of J&K.

During Feb 2019, Naik Sandeep was serving with his battalion 10 Para (SF) deployed in J&K for counter-insurgency operations. Naik Sandeep had undertaken numerous operations against the terrorists during his earlier stints too in J&K and had gathered substantial experience in anti-terrorist operations. Based on the reports from intelligence sources, an operation was planned on 12th Feb 2019 against a group of terrorists in Ratnipura village in Pulwama district. Naik Sandeep was a part of the team that was assigned the task to undertake this operation.

Naik Sandeep and his comrades reached the suspected area and launched a search & cordon operation. The terrorist on being cornered & challenged opened fire at the troops. In the ensuing gun battle 2 terrorists were eleminated, wherein Naik Sandeep played a key role displaying commendable courage & superior fieldcraft skills.  However during the exchange of fire Naik Sandeep received 3 gunshots and was seriously injured. Naik Sandeep was shifted to 92 Base hospital in Srinagar for the treatment. However, Naik Sandeep succumbed to his injuries after few days and was martyred on 19 Feb 2019.

Naik Sandeep Kaliraman was a gritty and valiant soldier who laid down his life at the age of 33 years in the line of his duty. Naik Sandeep is survived by father Shri Nainlal, mother Smt Kesar, wife Smt Geeta, two sons, daughter, sisters Urmila & Poonam and brother Shri Sonu.