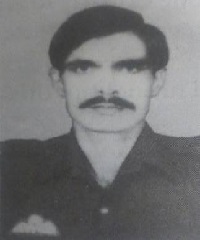 Place of Birth: Dughra, UP

Naik Ranjeet Singh was born on 1st July 1960 in Dughra village in Gorakhpur district of Uttar Pradesh. Son of Shri Ram Shankar Singh, Naik Ranjeet Singh was recruited into the Army on 20 July 1979. He was inducted into 5 Para of the famed Parachute Regiment known for various successful battle operations.

Naik Ranjeet Singh served with his unit in various operational areas and by 1989 had evolved into a dedicated soldier with substantial experience in field operations. On 29 July 1987, Indian government signed an agreement with Sri Lanka for bringing a peaceful solution to the insurgency in Sri Lanka. However the operations in Sri Lanka did not go as planned and IPKF got drawn into a bloody and long conflict. The Indian operations launched in August 1987 continued for the next three years, involving over 20000 soldiers. Naik Ranjeet Singh unit, 05 Para was inducted into Sri Lankan theater of operations in 1988.

After the induction of Indian forces in Aug 1987, the militants were supposed to surrender but the dreaded LTTE backed out and unleashed war on Indian forces. Initially, only 54 division of the Army was inducted but the escalation of the operations brought three more divisions 3, 4 and 57 into the conflict. By April 1989, Indian forces had undertaken numerous operations against LTTE but the war was far from over. Naik Ranjeet Singh ’s unit, 05 Para , was involved in Operation Pawan and was tasked for one such operation on 08 April 1989. Based on information given by a captured militant a decision was taken to launch an operation to flush out a group of 10 militants from a hideout, located in the area of operation of 05 Para.

In a daring move Naik Ranjeet Singh charged from behind the cover and while on the move, fired and  killed one militant. After eliminating one militant, he chased and wounded the other militant who, however, managed to escape. As Naik Ranjeet Singh dashed beyond the cover to continue his chase , he was fired at by the third militant and got severely injured . He was evacuated to the nearby Civil Hospital where he succumbed to his injuries. Naik Ranjeet Singh was a shining example of valour and devotion to duty, who laid down his life in the service of the nation.

Naik Ranjeet Singh was awarded “Vir Chakra”, for his exceptional courage, unyielding fighting spirit and supreme sacrifice during the operation.

On 8th April, 1989, based on information from a captured hard – core militant, a raid was launched to eliminate a group of 10 armed militants. Naik Ranjeet Singh was a member of the specially selected raid team. When the raid group reached a house, it came under intense automatic fire. Fire was immediately returned. When it was realised that the militants were trying to flee to the north, the group was divided into two sub teams. Naik Ranjeet Singh noticed two militants bringing down effective fire on number one sub team, thereby, slowing their advance. Naik Ranjeet Singh realized that time was running out and that the militants were getting away. He charged from behind the cover and while on the move, fired and  killed one militant. After killing the militant, he chased and wounded an other militant who, however, managed to escape. As Naik Ranjeet Singh dashed beyond the cover, he received a bullet in the chest from a third militant and was severely injured. He was evacuated to Kayts Civil Hospital where he succumbed to injury.