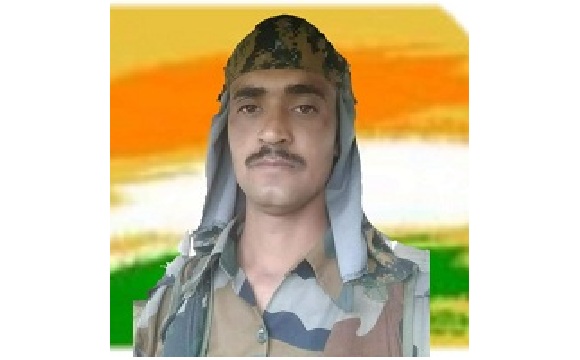 Naik Rameshwar Lal Chaudhary hailed from  Shivdan Pura village of Nawa tehsil in Nagaur district of Rajasthan. Son of late army veteran  Saval Singh, Nk Rameshwar always wanted to follow his father’s footsteps and don army uniform. Consequently, after passing his school education he joined the army in the year 2009 at the age of 20 years. eventually, Nk Rameshwar was recruited into 11 Jat battalion, the same battalion where his father had served. A year after joining the army, Nk Rameshwar got married to Ms. Sumitra Devi in the year 2010 and the couple had a son Ajay and a daughter Kruti.

By 2020, Nk Rameshwar had completed nearly 9-years of service and had developed into a committed soldier. After serving for a couple of years, Nk Rameshwar was deputed to serve with 45 RR battalion deployed in J&K for counter-insurgency operations.

During 2019-20, Naik Rameshwar Lal Chaudhary was serving with 45 RR Bn deployed in the Kupwara district of J&K. The AOR (Area Of Responsibility) of the Battalion ran along the LOC which was also prone to infiltration from across the border. Besides undertaking planned counter-insurgency and counter-infiltration operations, the unit launched regular armed patrols to monitor its area. Naik Rameshwar Lal Chaudhary was part of one such patrol on 13th Jan 2020 in the Machhil Sector. The designated route of the patrol passed through the rugged area and was also prone to avalanches. As the patrol was traversing through the assigned route, it was struck by a horrific avalanche.