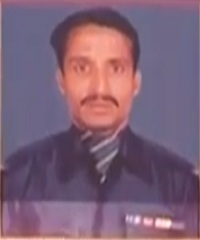 Naik Rambeer Singh Tomar hailed from Prempura Morena in Madhya Pradesh and was born on 15 August 1970. Son of Honorary Captain Rajendra Singh Tomar and Urmila Devi, he had one younger sister and two brothers as his siblings. Following into the footsteps of his father, he joined the Indian Army on 28 July 1989 at the age of 18 years. He was recruited into the 15th Battalion of the Kumaon Regiment, a regiment known for its gallant soldiers and numerous battle honours. After serving for a few years with his parent unit, Naik Rambeer was later deputed to 26 Rashtriya Rifles, deployed in J & K for counterinsurgency operations.

On  18th Oct, 2001, Nk Rambeer Singh’s unit received information about the presence of terrorists in a house in a village in Doda district which was located in its area of responsibility. A decision was taken by the security forces to launch a quick and well-coordinated operation to flush out the terrorists. The assault team which Naik Rambeer Singh was part of, swung into action and set out to cordon off the suspected area. The terrorists on being surrounded and challenged opened fire at the troops. This resulted in a gun battle where the terrorists were firing from the safe locations inside the building.

It was then decided to storm the building in a search and destroy operation to neutralize the hiding terrorists. Naik Rambeer volunteered to lead the team to storm the house. He displayed agility and unparalleled courage while entering the house and lobbed a grenade killing two terrorists on the spot. The third terrorist charged at Naik Rambeer and in a fierce hand to hand combat, he overpowered the terrorist and shot him dead. Sensing presence of more terrorists in the adjacent room and danger to his buddy, Naik Rambeer stormed the room in a daredevil action.

However, during the exchange of fire, Naik Rambeer was shot in his eye by the terrorist hiding in the room. Despite bleeding profusely Naik Rambeer displaying outstanding bravery threw a grenade and killed the fourth terrorist too. Naik Rambeer got severely injured during the operation and later succumbed to his injuries. Naik Rambeer single-handedly killed four terrorists and played a key role in successful completion of the operation wherein all the terrorists were neutralized. Naik Rambeer Singh was given the nation’s highest peacetime gallantry award, “Ashok Chakra” for displaying most conspicuous bravery, inspiring leadership, and unyielding fighting spirit in the face of the enemy.

Naik Rambeer Singh Tomar is survived by his parents, wife and two sons.

The citation for “Ashoka  Chakra” awarded to him reads:

On 18 October 2001 at 0930 hours after nearly two hours of heavy exchange of fire with terrorists un Kako village, in Doda district of Jammu and Kashmir, Naik Rambeer Singh Tomar volunteered to be an entry man for the search of the house from where the fire came. He lobbed grenade and rushed into the house and displaying unparalleled courage, quick reflexes shot dead two terrorists on the spot. The third terrorist charged at Naik Rambeer Singh Tomar. In a fierce hand to hand combat, he overpowered the terrorist and shot him dead.

Sensing presence of more terrorists in the adjacent room which posed a danger to his buddy, Naik Rambeer Singh Tomar with utter disregard to personal safety, stormed into the room where he was shot at below his left eye by the fourth terrorist. Despite serious injuries , he lobbed a grenade and killed the fourth terrorist.

In this operation, the gallant soldier, single handedly killed four dreaded terrorists before he succumbed to his fatal injury while being evacuated. Naik Rambeer Singh Tomar , thus displayed most conspicuous bravery , raw courage , concern for fellow soldiers and made the supreme sacrifice in the highest traditions of the Indian Army.