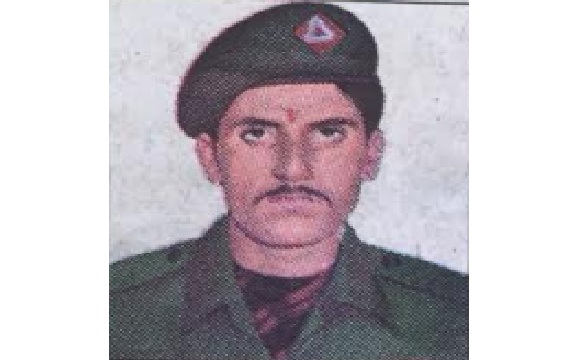 Naik Ram Swaroop Singh hailed from Bisau village in Jhunjhunu district of Rajasthan and was born on 06th may 1966. Son of Shri Nagramal Mundariya and Smt Manohari Devi, he had a brother Surendra Singh and sister Sulochana as siblings. Like many youngsters of his village, he was inclined to join the Armed Forces since his childhood. Eventually he joined the army after completing his school education.

He was recruited into 17 Jat of the well known Jat Regiment, a Regiment widely respected for its gallant soldiers and numerous battle exploits. After serving for a few years, he got married to Ms Savitri Devi and the couple had two kids, son Sunil and daughter Sunita.

During July 1999, Naik Ram Swaroop Singh’s unit 17 Jat was deployed in J & K along the LOC. In May 1999, the Indian Army detected a massive infiltration by the Pakistani military and paramilitary forces in the Kargil region of Jammu and Kashmir. The army quickly mobilized its forces to drive out the Pakistani infiltrators from Indian territory. 17 Jat battalion too got deployed as part of ‘Op Vijay’ launched by the Army in response to Pakistan’s aggression. As part of operations in the area 17 Jat was tasked to secure Pt. 4875, also known as Pimple II, a strategic mountain peak on the western side of Tiger Hill which was occupied by Pakistani infiltrators. Due to its strategic location, securing Pt. 4875 was a top priority for the Indian Army. The peak, which stood at 15,990 feet above sea level, had extremely steep slopes. The eviction of Pakistani regulars from Pt 4875 in Kargil was crucial if Tiger Hill had to be recaptured. Naik Ram Swaroop Singh was part of Company which was given the task to secure the peak without waiting for any aerial support on 07 July 1999.

During the initial phase of the assault on Pt. 4875, one of the officers Maj Ritesh Sharma got injured and was evacuated. After the initial setback, the assault team split into two groups, one led by Capt Vikram Batra and other by Capt Nayyar. The Pakistani infiltrators had constructed several bunkers on Pt. 4875 and Capt Nayyar’s team, which consisted of 7 personnel, located 4 enemy bunkers. The company began to ascend Pt. 4875 during which it came under heavy artillery and mortar fire from Pakistani infiltrators. However, the troops counter-attacked, which also included hand-to-hand combat, forcing the Pakistani soldiers to retreat. During the battle, Naik Ram Swaroop Singh and his comrades killed 9 Pakistani soldiers and destroyed three medium machine gun bunkers. However during the fierce exchange of fire Naik Ram Swaroop Singh received gun shots and was seriously injured. He later succumbed to his injuries and was martyred. Eventually the Point 4875 was secured by 17 Jat battalion. The securing of the Pimple Complex area paved the way for the recapture of Tiger Hill which finally forced Pakistan to retreat its forces to pre-conflict positions. Naik Ram Swaroop Singh was a gallant soldier, who laid down his life in the service of the nation, following the highest traditions of the Indian Army.