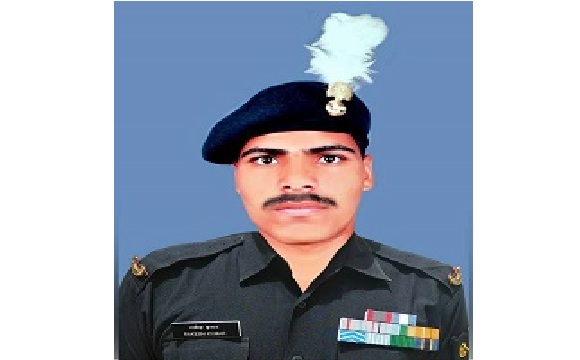 Naik Rakesh Kumar hailed from Dhirdesar village of Bikaner district in Rajasthan. He belonged to 11 Grenadiers of the famed the Grenadiers regiment, known for its valiant soldiers and numerous battle honours. During 2017-18, Naik Rakesh Kumar’s unit was deployed in the North East and was engaged in counterinsurgency operations.

On 24th January 2018, credible information was received from intelligence sources about the presence of militants in the Namsai district of Arunachal Pradesh. After analyzing the situation, the security forces decided to launch a combing operation to nab the militants. The suspected militants belonged to CorCom,  a short name for Coordination Committee in Manipur, which was responsible for many bombings usually associated with Indian holidays and elections. Also, some more militants belonging to  ULFA (I) (The United Liberation Front of Assam), who were involved in terrorist activities for a sovereign state of Assam through armed struggle, were expected to be in that area.

When the army convoy of 11 Grenadiers was returning after conducting an operation against militants an “Improvised Explosive Device” (IED) blast was triggered by ULFA (I) militants. Though the Army convoy of 11 Grenadiers Regiment, which was passing in between Nongtau and Piyong road around 9 AM escaped the IED blast, a civilian vehicle, which was following the Army convoy was slightly damaged. 11 Grenadiers Regiment, which came under attack, immediately launched attack after the IED blast. The Army troops cordoned off the area and launched the operation against the militants, hiding in the nearby forest area. During the heavy exchange of fire, Naik Rakesh Kumar got seriously wounded and later succumbed to his injuries on way to the hospital.

Naik Rakesh Kumar Chotia was a brave and committed soldier who laid down his life in the line of duty while serving his motherland.