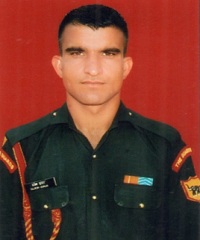 Naik Rajesh Kumar hailed from Rajrana village in Sardulgarh tehsil of Mansa district of Punjab. After completing his school education, he joined the army and was recruited into 3 Guards Battalion of the Brigade of Guards, an infantry Regiment known for its brave soldiers and numerous battle honours. After serving for few years with his parent unit, Naik Rajesh Kumar was deputed to serve with 21 RR Battalion, deployed in J&K for counter-insurgency operations.

During 2020,  Nk Rajesh Kumar was serving with 21 RR battalion deployed in J&K. As a number of militants were active in the unit’s AOR(Area of Responsibility), the unit troops had to maintain a very high state of preparedness at all times and had to undertake operations at a short notice. Based on the information from the intelligence sources, about the presence of some hardcore militants in Wadarbala-Rajwara forests in Kupwara district, the security forces decided to launch a joint combing operation on 01 May 2020, comprising the elements of Army, CRPF, and J&K Police. As planned the joint task force launched the operation on the morning of 01 May 2020, wherein the Army team comprised 21 RR troops led by Col Ashutosh Sharma, the Commanding Officer of 21 RR. Besides the CO himself, the 21 RR team included the Company Commander Maj Anuj Sood, Naik Rajesh Kumar, Lance Naik Dinesh Singh, and few more soldiers.

As Naik Rajesh Kumar along with his CO Col Ashutosh Sharma and other soldiers was returning from the massive combing operation in Wadarbala-Rajwara forests on 02 May 2020, the team received inputs that 2-4 terrorists had taken refuge in a house in the nearby Chanjimulla hamlet. As per the information received, the terrorists clad in combat uniform had taken few civilians hostage in one of the houses. Naik Rajesh Kumar and his team immediately reached the site and swung into action. The terrorists were found to be hiding in two adjacent houses who fired at the troops on being challenged.

A fierce gun-battle ensued thereafter lasting for several hours. During the drawn-out battle, Naik Rajesh Kumar and his comrades managed to eliminate two terrorists and also succeeded in extricating a number of civilians. However, during the heavy exchange of fire Col Ashutosh Sharma, Maj Anuj Sood, Naik Rajesh Kumar, and Lance Naik Dinesh Singh got severely injured. They later succumbed to their injuries and were martyred. Nk Rajesh Kumar was a valiant and committed soldier, who laid down his life in the line of his duty.

Nk Rajesh Kumar was given the gallantry award, “Sena Medal”  on 26 Jan 2021 for his exceptional courage, devotion to duty, and supreme sacrifice.