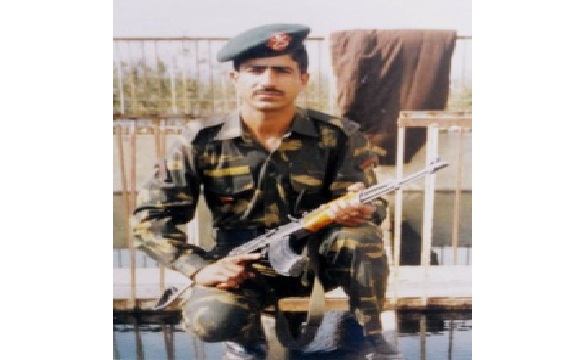 Naik Rajendra Singh hailed from Lalgarh village in Churu district of Rajasthan and was born on 01 Jan 1976. Son of  Shri Akhe Singh Rathore and Smt Dhakha Kanwar, he joined the Army after completing his school education in the year 1996 at the age of 20 years. He was recruited into 14 Grenadiers of the Grenadiers Regiment, an infantry Regiment known for its brave soldiers and having a glorious history of various battle honours.

After completing his training he served in many field areas and took part in various challenging operations. A large part of his service career was spent in the trouble torn Kashmir area taking part in numerous counter-insurgency operations. The various operations that he was part of included Op Rakshak (Jan 1997 to Dec 1999), Op Vijay (Rakshak) (Dec 1999 to Feb 2000) and Op Rakshak ( Feb 2000 to Mar 2005). By 2005, he had put in around 09 years of service and had been promoted to the rank of Naik. By then he had served in various field areas and gained the field-craft skills required to be a battle-ready soldier. After serving for few years he got married to, Ms Manju and the couple had 2 sons and 2 daughters.

During 2005, Naik Rajendra Singh's unit 14 Grenadiers was deployed in Kupwara district of Jammu and Kashmir. The unit troops were engaged in counter-insurgency operations on a regular basis as its AOR (Area of Operation) was affected by active militancy. Besides manning the forward posts in Kupwara district, Naik Rajendra Singh’s unit also undertook operations to check the infiltration bids as its AOR was prone to infiltration by the militants from across the border. One such operation was undertaken by 14 Grenadiers on 25 May 2005, based on the information from the intelligence sources. Naik Rajendra Singh was part of the team that was assigned the task of undertaking this operation. 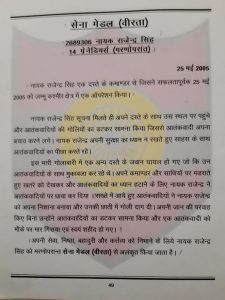