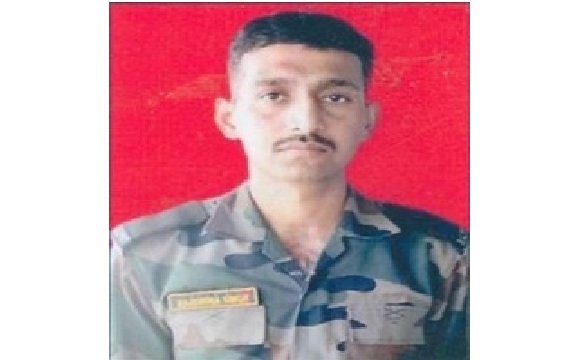 Naik Rajendra Singh Bhati was born on 24th Dec 1992 and hailed from Mohangarh in the Jaisalmer district of Rajasthan. Son of an army veteran Late Hav Sawal Singh Bhati and Smt Nain Kanwar Rathore, Nk Rajendra Singh had two brothers Shri Samunder Singh & Shri Govind Singh. Coming from a military family, Nk Rajendra Singh always wanted to don the army uniform right from his younger days. Eventually, after completing his school education he joined the army on 1st Jan 2013 at the age of 21 years and was recruited into the 15 Rajput Battalion of the Rajput Regiment, an infantry Regiment known for its valour and battle honours in various operations

After serving for few years, Nk Rajendra Singh got married to Ms. Jamna Kanwar.  After completing his training Nk Rajendra Singh served with his parent unit for some years and later he was deputed to serve with 23 RR Bn deployed in the Kashmir valley.

During Sept 2019, Nk Rajendra Singh’s unit, 23 RR was deployed in the Ramban district of J&K for counter-insurgency operations. The AOR ( Area Of Responsibility) of the battalion was the hotbed of militant activity and the troops had to be on guard at all times. The unit was engaged in operations against the militants on a regular basis. Based on the information about the presence of a few terrorists in the general area of Batote, the unit decided to launch an operation with its QRT(Quick Reaction Team). Nk Rajendra Singh was part of the QRT that was tasked to undertake the operation. The QRT as planned reached the suspected area and soon made contact with the terrorists.

A gun battle followed thereafter but the armed militants managed to escape from the spot at Kundrala, nine kilometers away from Batote. After a hot chase, they entered the house and took the owner as a hostage. A joint operation was then launched with the elements of J&K police, Army, CISF, and CRPF. The repeated attempts of the security forces to make the terrorists surrender failed as they were trying to buy time to flee the house taking advantage of darkness later in the day. When the security forces tightened the cordon, the militants in a desperate attempt started firing indiscriminately to break the cordon and flee. But Nk Rajendra Singh and the team engaged the militants and succeeded and eliminated them. However, during the exchange of fire Nk Rajendra Singh got seriously injured and later succumbed to his injuries.

Nk Rajendra Singh Bhati was a valiant and committed soldier who laid down his life at the age of 27 years in the line of his duty. He was given the gallantry award “Sena Medal” (posthumous) for his exceptional courage, devotion to duty, and supreme sacrifice.