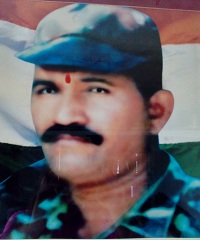 Naik Rajendra H Tibile hailed from Mattiwad in Hukkeri taluk of Belgaum district in Karnataka and was born on 10 July 1965. Son of Shri Harigovinda and Smt Radha Bai, Naik Tibile had two brothers and two sisters as his siblings. He completed his schooling from his hometown Mattiwad and joined the Army in the year 1983 at the age of 18 years. He was recruited into 557 ASC battalion of the Army Service Corps, the logistic supply arm of Indian Army.

After serving for few years he got married  to Ms Indhu in the year 1994 and the  couple had four daughters Rusha & Thrupthi (twins)  Shradha and Deeksha. By the year 2005, he had put in over 22 years of service and had been promoted to the rank of Naik. By that time, he had served in varous operational areas in Rajasthan, Manipur and Assam.

During 2005  Naik Rajendra H Tibile’s unit was deployed in the trouble torn part of Assam. As the AOR(Area of Responsibility) of the unit was affected by militancy, the unit troops were engaged in operations against the militants on a frequent basis. The unit launched regular patrols to monitor suspicious activities as part of their operations to keep militancy under check. Naik Tibile and his comrades often undertook regular patrol in that sector where ultras often resorted to ambush and killing of army personnel. The movement of men and material was undertaken under armed escorts as the ULFA militants often attacked such convoys to cause maximum damage. On 16 Jan 2005, Naik Tibile was part of one such convoy taking men and supporting equipment for an operational task.

As the convoy reached a vulnerable place, the ULFA militants attacked the convoy with automatic weapons. Naik Tibile and other soldiers though taken aback by the surprise attack, rose to the occasion and launched a counter attack. A fierce gun-battle ensued thereafter with heavy firing from both sides. However during the heavy exchange of fire, Naik Tibile received gun shots and got seriously wounded. He later succumbed to his  injuries and was martyred. Naik Tibile was a valiant and committed soldier, who laid down his life in the line of his duty.