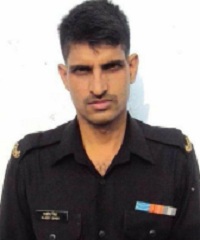 Naik Rajeev Singh Shekhawat hailed from  Luhakna Khurd village in Jaipur district of Rajasthan. After completing his school education, he joined the army and was recruited into 5 Rajput Battalion of the Rajput Regiment, an infantry regiment with a long history of bravery in various wars & operations. During his service career, Naik Rajeev Singh served in various operational areas with challenging terrain and work environments.

On 8th Feb 2020, in the late night Pakistan Army troops initiated unprovoked firing on Indian posts from across the border in Degwar Sector of Poonch. During that period, Naik Rajeev’s unit, 5 Rajput was manning the forward posts along the Line of Control in the Poonch sector. The Pakistani troops violated the ceasefire and resorted to heavy cross border shelling of various Indian Army posts and civilian areas. Indian army responded in a befitting manner to the Pakistani aggression and consequently, a heavy exchange of fire ensued thereafter, which continued intermittently through the night. Heavy caliber weapons and rockets were used during the cross border firing. However, during this cross border shelling, Naik Rajeev Singh and two more soldiers got severely injured by shell splinters.The soldiers were immediately evacuated to the military hospital for specialized treatment. However, Naik Rajeev Singh succumbed to his injuries and was matryred. Naik Rajeev Singh was a valiant and committed soldier who laid down his life in the line of his duty.