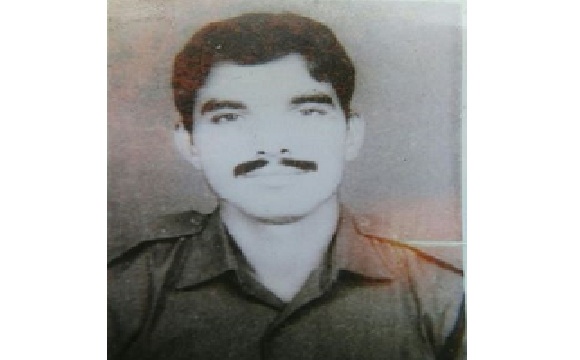 Naik Prabhu Ram Chotiya hailed from Nagaur district of Rajasthan and was born on 3rd January 1968. Son of  Mrs. Gulabi Devi and Mr. Dhana Ram Chotiya, Naik Prabhu Ram did his schooling in the Government school at Nagaur. He excelled at school, securing first Division and winning awards throughout his academic career. Through hard work and will-power, Naik Prabhu Ram Chotiya was selected for the Indian Army in September 1987. He was recruited into 18 Grenadiers of the famed the Grenadiers regiment, a regiment known for its fearless soldiers and numerous battle honours.

By 1999, Naik Prabhu Ram Chotiya had put in over twelve years of service in the Army and had served with his unit in various operational areas with challenging working conditions. He was the part of Op Pawan from 2nd September 1989 to 21st of March 1990, and thereafter he was posted in north Sikkim. Subsequently, his unit got deployed in J&K area in Mar 1999 as part of Op Vijay.

During June 1999, Naik Prabhu Ram Chotiya’s unit was deployed in the Drass sector of J&K under the command of 56 Mtn Brigade. As part of the ongoing operations 56 Mtn Brigade planned a multi-direction attack to capture Tololing by 13th June 1999. As per the plan 2 Raj Rif battalion was to launch the attack and 18 Grenadiers was to provide the firm base. Naik Prabhu Ram Chotiya and his men of the 18 Grenadiers were tasked to provide the base on the treacherous, icy slopes of Tololing in the Drass sector. He was part of a light machine gun commando team who was asked to recapture Pakistani bunkers along the mountain top of Tololing. As with so many of the later operations in Kargil, this too was a dangerous mission requiring an uphill accent towards entrenched enemy posts who had the advantage of height and a bird’s eye view.

On night 12/13 June 1999, Naik Prabhu Ram Chotiya and his comrades set off for their assigned task and as they closed in with the objective, the enemy brought down heavy fire on them. The leading section of his platoon suffered three casualties and the attack was stalled temporarily. At this juncture, Naik Prabhu Ram Chotiya got a burst of light machine gun fire. Unmindful of his injuries, he moved ahead with his men and continued to do so till he succumbed to his injuries at the base of the enemy position. Naik Prabhu Ram Chotiya displayed exceptional bravery, conspicuous gallantry and dogged determination in the face of the enemy and made the supreme sacrifice in the highest traditions of the Indian Army.