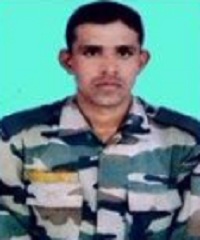 Naik Peera Ram hailed from Khema Pura village of Barmer district in Rajasthan. After completing his school education he joined the army in the year  2008 at the age of 18 years. He was recruited into 8 Jat Bn of the Jat Regiment, an infantry regiment known for its brave soldiers. By the year-2019, Nk Peera Ram had put in over 10 years of service and developed into a dedicated soldier with commendable devotion to duty.

During Nov 2019,  Nk Peera Ram’s unit8 Jat was deployed in Keran Sector of Kupwara district in the Kashmir valley. The unit was deployed in the high altitude areas along the LOC and was manning the forward posts along the border. Besides manning the posts, the troops launched regular armed patrols to monitor the area between the posts. The patrol routes often passed through inaccessible areas coupled with hostile terrain and weather conditions. Nk Peera Ram was part of one such patrol on 24th Nov 2019 in Keran sector along the LOC.

Nk Peera Ram is survived by his wife and two sons.