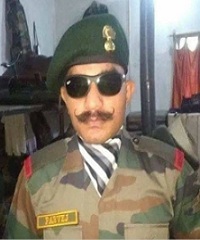 Naik Pervez Khan hailed from Shekhawas village of Rajsamand district in Rajasthan and was born on 07 January 1990. Son of an army veteran Hav Mangu Khan and Smt Shanta Bi, Naik Pervez always wanted to don the army uniform like his father right from his younger days. Eventually, after completing his school education, he joined the army in 2009 at the age of 19-years. He was inducted into the 5th battalion of the famed Grenadiers Regiment, an infantry regiment known for its valiant soldiers and numerous battle honours.

By 2019, Naik Pervez had put in around ten years of service and had evolved into a dedicated and disciplined soldier. After serving for few years, Naik Pervez got married to Ms Shenaaz and the couple had a daughter Rubiya and son Jishan.

During 2019, Naik Pervez’s unit 05 Grenadiers was deployed in Baramulla district of J&K. The unit troops were manning the forward posts in Baramulla district along the LOC. Besides manning the posts, the unit soldiers had to undertake armed patrols regularly to monitor the area under its AOR ( Area of Responsibility). The posts were located in high altitude areas with inhospitable weather conditions and rugged terrain. Many posts, as well as the patrol routes of the unit, were prone to snow blizzards, avalanche and unpredictable landslides specially during winter seasons. One such landslide struck the patrol party of the unit on 28 Mar 2019. Naik Pervez was part of this patrol along with a few of his comrades.

As a result of the sudden landslide, Naik Pervez fell down into a deep stream flowing along the patrol route. A rescue team was launched immediately which manged to recover Naik Pervez from the stream, who had sustained severe injuries.  He was shifted to 92 Base Hospital in Srinagar for providing the necessary medical treatment. However Naik Pervez succumbed to his injuries and was martyred. Naik Pervez was a valiant and committed soldier who laid down his life at the age of 29 years in the line of his duty.