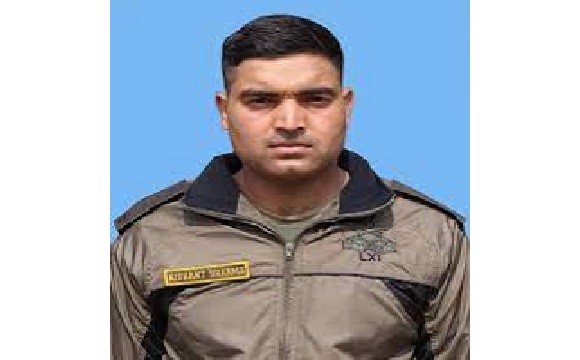 Place of birth : Saharanpur, (UP)

Naik Nishant Sharma hailed from New Shardanagar in Saharnpur in Uttar Pradesh. Son of Shri Jogendra Sharma and Smt Mamta Sharma, Naik Nishant Sharma had two brothers Shubham Sharma and Rishab Sharma as siblings. He joined the Army after completing his education at the age of 19 years. He was recruited into 10 JAK Rif battalion of the well known Jammu and Kashmir Rifles Regiment, an infantry regiment widely respected for its intrepid soldiers and numerous battle exploits.

After serving for few years, he got married to Ms Sonam in the year 2017. By the year 2020, he had served for a substantial number of years and developed into a tough and dedicated soldier. After serving for a couple of years with his parent unit he was deputed to serve with 61 RR battalion deployed in J&K for counter-insurgency operations.

During Jan 2021, Naik Nishant Sharma‘s unit 61 RR was deployed in the Sunderbani sector of J & K along the LOC. India shares a 3,323-km border with Pakistan, of which 221 km of the IB and 740 km of the LOC fall in Jammu and Kashmir. As in the previous years, the LOC was highly active and volatile where ceasefire violations occurred very often and without any warning. It was also used by the terrorists for infiltration with the connivance of Pakistani security forces. The year 2020 witnessed very high number of ceasefire violations and the trend continued in the year 2021 too. One more such ceasefire violation took place on 18 Jan 2021 in Rajouri district of J&K.

On 18 Jan 2021, Pakistani troops initiated unprovoked firing on Indian posts from across the border in the Sunderbani sector in Rajouri district. Pakistani soldiers violated the ceasefire and resorted to unprovoked firing using small arms, automatics, and mortars. Pakistan army resorted to shelling and firing in Sunderbani sector with a view to push trained militants into the Indian territory. Naik Nishant Sharma’s unit was manning one of the forward posts in that sector. Indian forces retaliated forcefully against the ceasefire violation and the cross border firing continued for several hours. However, during the exchange of fire, Naik Nishant Sharma got grievously injured and was shifted to the Command Hospital at Udhampur for medical treatment. However, Naik Nishant Sharma later succumbed to his injuries on 24 Jan 2021 and was martyred. Naik Nishant Sharma was a valiant and committed soldier who laid down his life in the service of the nation.