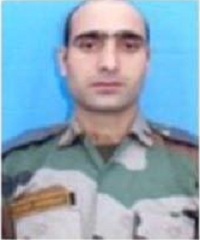 Naik Muhammad Ahraf Rather hailed from Reshigund village of Kralpora district in Jammu & Kashmir. He had joined the Territorial Army in 2004 and had served in various operational areas in his 14 years of service. During 2018 he was serving with 160 Infantry Battalion of TA, which was deployed in Kupwara district of J & K.

A fierce gun battle ensued thereafter lasting for over 48 hours. The joint assault team succeeded in eliminating five hard core militants during the operation. Besides the troops of para military forces, the joint team had soldiers from 160 Infantry Battalion of Territorial Army and 5 Bihar of the Bihar Regiment. However during the heavy exchange of fire, two soldiers of 160 Inf Bn, Naik Mohammad Ashraf Rather and Hav Jorabar Singh and one soldier of 5 Bihar, Naik Ranjit Khalkho got seriously injured and later succumbed to their injuries. Naik Mohammad Ashraf Rather was a brave and dedicated soldier who laid down his life in the service of the nation.

Naik Mohd Ashraf Rather is survived by his wife and a daughter.