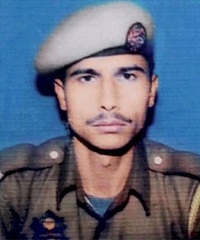 Naik Manzoor Ahmed Deva was a resident of Kewa village of Qazigund in Anantnag district of J&K. Naik Manzoor Ahmad Deva was the youngest of the three sons of his parents and had lost his father at an early age. He was brought up by his two elder brothers as his mother had serous medical problem and was unable to take care of him.

Naik Manzoor Ahmed Deva belonged to 1 JAK Li unit and during 2018, his unit was deployed in J & K and was stationed in the Sunjuwan camp of 36 Brigade.

Soon Army personnel in bullet-proof vehicles got engaged in the operation to rescue people from the family quarters in the rear side of the base. Subsequently the army’s special forces also joined the operation against the terrorists which continued for nearly 72 hours, when all of them were finally neutralized. During the intense operation with heavy exchange of fire, Sub Mohd Ashraf Mir, Hav Habibullah Qureshi, Hav Rakesh Chandra, Nk Manzoor Ahmed Deva & Lance Naik Mohd Iqbal Sheikh got severely injured and later succumbed to their injuries.

Naik Manzoor Ahmad Deva was a valiant and committed soldier who laid down his life in the service of the nation. He is survived by a mentally challenged mother, wife and two little daughters.