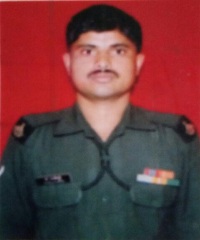 Naik Mallikarjun Hanumanth Murabandi hailed from Mamadapur village in Belgaum district of Karnataka. Son of Shri Hanumantha and Smt Bowramma, Naik Mallikarjun was born on 1st June 1970 and was third among four siblings. Naik Mallikarjun completed his primary and higher secondary education in his hometown and joined the college in Bijapur.  After completing his II year PUC he joined the Indian Army at the age of  21 years. He was recruited into 12 Maratha of the Maratha Light Infantry Regiment, a regiment well known for its brave soldiers and various battle honours.

Naik Mallikarjun served in various operational areas in Punjab, Dehradun, before being posted to the unit in Himachal Pradesh in 2003. By that time he had put in about 13 years of service and evolved into a committed soldier. Naik Mallikarjun got married to Bharthi in the year 1996, and the couple had one son Chethan.

During 2003, Naik Mallikarjun’s unit 12 Maratha was deployed in Himachal Pradesh. It was heavy snowfall  It was one of the remote parts of the valley and remains inaccessible not only during winter but the whole year. The sector is heavily militarized and soldiers are stationed on mountaintop posts to guard the Line of Control and prevent infiltration of militants.

On 8th April 2003 in the mountainous northern region of the Himachal Pradesh received heavy snowfall resulting in avalanches in the area.  Naik Mallikarjun along with his six comrades got stuck inside the tent struggled a lot and was not able to come out of the tent as it was fully covered by the snow, Naik Mallikarjun and their fellow men laid down their lives in the service of the nation and honored by Badge of sacrifice award.

Naik Mallikarjun Hanumanth Murabandi is survived by his wife  Bharathi serving as a teacher in Bagalkot and a son Chethan mallikarjun of 20 years old at present doing his BE.