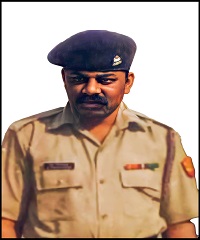 NK M. Ravi Chandran hailed from Lakshmipuram(Erichanatham) village in Virudhunagar district of Tamil Nadu and was born on 10 May 1965. Son of Shri Mariappan and Smt Lakshmi, he joined the Army at the age of 20 years. He was recruited into 116 Infantry Battalion (TA) Para in 1985 at Nasik. Post this tenure, in 1994 he was enrolled in the Defence Security Corps (DSC) at Kannur, the sixth-largest corps of Army involved in the crucial task of guarding the defence installations. During his service in DSC, he served in various field areas including some of the very challenging high altitude areas. He served in numerous defence establishments located at Udhampur (J&K), Ooty(TN), Ichapore (West Bengal), Vasco-da-Gama (Goa), Bikaner (Rajasthan), Ludhiana (Punjab), Vishakhapatnam (Andhra Pradesh), Uttarakhand, Ooty(TN), Andaman & Nicobar Islands, and Chennai (TN).

Over the years he developed into a tough and dedicated soldier. The challenging and less ordinary life of defence had become very much a part of him. His 32 years of a long commitment to the country came to an end when his vigilant eyes which guarded the defence installations closed forever at 21:20 of 22 January 2021 while posted at 164 DSC Platoon attached to AFS Avadi, Chennai. On that fateful night, he suffered a heart attack and complained of chest pain and breathlessness to his colleagues at DSC mess. He was rushed to the nearby Station Medical Centre (SMC) for treatment where he finally took his last breath. As a dedicated soldier, he served the country till his last.

Naik M. Ravi Chandran was a vibrant person known for his jovial and helping nature. Besides a committed soldier, he was a family man who did all his responsibilities to the fullest. His demise has left a void in the hearts of many in his village, and he will be remembered for his simplicity, selflessness, and service to the nation.