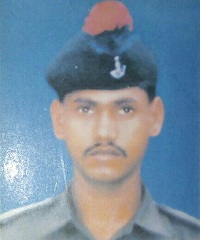 Naik Krishna Bhikku Patil was the son of Bhiku Patil and Parvati Patil. He was born in the village of Patil gali, Santibastwad Taluk which is approximately 2 KM away from Belgaum in Karnataka. He had five siblings. Naik Krishna Patil was brought up in a very hard way. His parents had to toil day in day out in the field to take care of the family.  During his younger days, while he was still studying, he too used to help his parents in the field. Due to lack of money, he was not able to continue his higher education. He then decided to join the army so that he could serve the nation in the best possible way and also to help his family financially. He was helped and motivated to join the army by his elder brother’s friend who was an officer in Belgaum unit.

On 27th November 1982, he was enrolled in 22 MLI of the Maratha Light Infantry regiment and took ten months of rigorous training in Belgaum Centre and later joined the operational unit. His first posting was in Arunachal Pradesh and later he was posted to various locations in India during his service.

After his nine years of service, he got married to Anita Hattiker and they had three daughters named Arati, Archana, and Yogita. During his last posting to 27 RR, his family was residing in Belgaum. In 2001, during his last call to his wife, he said that he was serving on a mountain and hence would not be able to communicate with her for some time. On 8th of March 2001, after eight days of his call, his family got a call from Maratha office Center informing them that Krishna Patil had been martyred while fighting the enemies. It was a very sad moment for the family members but they feel proud that he had sacrificed his life in the service of the nation.

Naik Krishna Bhikku Patil is survived by his wife and three daughters.