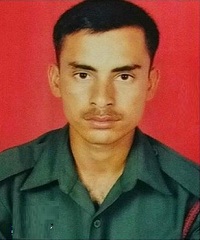 Naik Jagadish hailed from Gandashu village of  Chamoli district in Uttarakhand.  During January 2018, his unit was deployed in Krishna Ghati sector in Poonch district of J & K.

The Krishna Ghati sector in Poonch district of J & K along the LoC is very volatile as the Pakistan troops resort to cross border firing very often in this area. During Jan 2018, Naik Jagadish’s unit was deployed in this sector and its troops were manning various forward posts along the LoC. On 20 Jan 2018, Pakistani troops violated the ceasefire along the Line of Control in Krishna Ghati sector and resorted to heavy mortar shelling of various  Indian Army posts and civilian areas. Pakistani Army initiated indiscriminate firing of small arms, automatics, 82 mm and 120 mm mortars since morning hours on that day.

The Indian forces gave a befitting reply to the unprovoked firing and consequently the exchange of fire continued for several hours. During the heavy exchange of fire Naik Jagadish manning one of the forward posts got severely injured. Naik Jagadish sustained grievous splinter injuries and was  immediately evacuated to the nearby Military Hospital in Jammu. He was provided with intensive medical care but could not be saved and succumbed to his injuries  on 24th Jan.  Naik Jagadish was a disciplined and committed soldier who laid down his life in the service of the nation.

Naik Jagadish is survived by his wife Usha and two children.