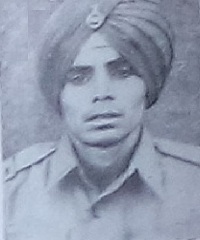 Naik Gurjant Singh was born on 27th November 1943, at Sangrur Punjab. He was son of Mr Hari Singh. He was commissioned to Indian Army on November 27th 1962.

On 12th December 1971, Naik Gurjant Singh was the section commander for an assaulting platoons of Sikh Regiment which was attacked in Parbat Ali in Rajasthan Sector. After the Platoons objective were captured the enemy was forming up for a new attack. And platoon was ordered to charge at the enemy and break the assault. Naik Singh led his section in hand to hand fight and killed seven enemy soldiers. In this action naik Singh succumbed to his injuries and died.

In this action he displayed gallantry courage and determination towards his work.

The Citaion for the Award Vir Chakra reads him to:

Naik Gurjant Singh was section commander of one of the assaulting platoons of Sikh Regiment which attacked Parbat Ali in the Rajasthan sector. On the night of 12th December 1971, After his platoon had captured the objective the enemy was seen forming up for a counter attack. His platoon was ordered to charge at the enemy and break up the assault. Naik Singh led his section and in the hand to hand fight bayoneted seven enemy soldiers to death before he succumbed to his injuries.