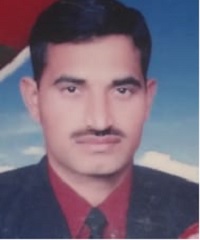 Naik Girijesh Kumar was born on 1st Apr 1974 in a remote village of Patipura in Mathura district of Uttar Pradesh. Son of Sri Lakhpat Singh and Smt Mahaviri Devi, Naik Girijesh Kumar did his basic education from a government school in Patipura village. His family members were mostly involved in cultivation and farming. Thereafter he joined the Army in 1994 and was recruited into 9 Rajputana Rifles on 7th Mar 1994. By 2008, Naik Girijesh Kumar had put in about 14 years of service and had grown into a professionally competent and committed soldier.

During 2008, Naik Girijesh Kumar’s unit was engaged in operations against the terrorists operating in that area. On 23 Jan 2008, around 8 pm his unit received information from the intelligence sources about the presence of terrorists in a area close to their camp in Jammu. After analyzing the situation, it was decided to launch a search and destroy operation against the terrorists. The team comprising Naik Girijesh Kumar and his comrades swung into action. The assault team soon took up positions to cordon off the area, but in no time they came under heavy attack from the terrorists.

A fierce gun battle followed and the troops succeeded in eliminating few of the terrorists. However, during the heavy exchange of fire, two soldiers of the team were killed by the terrorists and they were menacingly close to killing other soldiers too. Realizing the critical situation and the danger to the life of his fellow soldiers, Naik Girijesh Kumar took position and started firing on terrorists. However in doing so he too got hit by a barrage of gunshots and was severely injured. He finally succumbed to his injuries and attained martyrdom.  Naik Girijesh Kumar showed extreme courage, valour and camaraderie during the operation and laid down his life in the service of the nation.

Naik Girijesh Kumar was given the gallantry award “Sena Medal” posthumously for his courage, leadership and supreme sacrifice. Naik Girijesh Kumar is survived by his wife Krishna Devi, daughter Priyanka and his two sons Akash & Vikas.