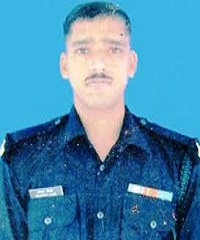 Naik Gawade Pandurang Mahadev hailed from  Amboli village of Sindhudurg district in Maharashtra. Naik Gawade wanted to join the Armed Forces since his childhood and consequently joined the Army at the age of 20 years on September 21, 2001. He was recruited into the Maratha Light Infantry Regiment, a regiment known for its brave soldiers and numerous battle and theater honours. After serving for a few years with his unit, Naik Gawade was later deputed to 41 RR unit deployed in J & K area for counterinsurgency operations.

During 2016, Naik Gawade’s unit was operating in Kupwara district of J &K and was engaged in operations against the militants on a regular basis. During his tenure with 41 RR , Naik Gawade had participated in numerous anti-militancy operations in the higher and treacherous areas of Kupwara district. A technically sound soldier, Naik Gawade, had developed multiple combat and computer skills in his 15 years of service. Besides being a good hockey player, he was adept in handling sniper rifle and all types of communication equipment. On 21 May 2016, information was received from the intelligence sources about the presence of some militants in Chak Durgmulla area in Kupwara district. A joint team of Army and J & K police was launched to nab the militants and Naik Gawade was part of the contingent from 41 RR that formed the team.

The team launched the operation as planned and cordoned off the suspected area. Naik Gawade was part of the column which initially located and engaged with the terrorists. Using his battle craft and field craft, Naik Gawade closed into the location and kept directing the rest of team members to bring down effective fire onto the ultras. While closing in, he was hit by splinters and sustained injuries on head and face after which he was evacuated to 168 Military Hospital. The militants were heavily armed and the gun battle continued for nine hours, leading to the successful elimination of all five terrorists. However Naik Gawade, who was subsequently shifted to 92 Base Hospital, Srinagar succumbed to his injuries and was martyred.

Naik Gawade was a brave, agile and battle-hardened soldier, who would volunteer for daredevil missions against the militants in the valley. On May 21, he did what he knew the best to take on the highly trained militants. Naik Gawade was given the gallantry award,” Shaurya Chakra” posthumously for his conspicuous courage, fighting spirit and supreme sacrifice. Naik Gawade is survived by his wife Pranjal and two sons Prajwal and Vedant.

The Citation to the Award reads him to:

Naik Gawade Pandurang Mahadev was part of close cordon established around the target house in village Chak Drugmulla at Kupawara district of Jammu & Kashmir on night 20/21st May 2016 at 12.30 hrs terrorists hiding inside the house opened indiscriminate fire on the cordon in a bid to escape sensing danger to own troops, Nk Gawade crawled forward under heavy fire from the terrorists and engaged them resulting in elimination of one trained hardcore terrorist. The Naik Gawade sustained splinter injuries from the under barrel grenade launcher fired from the terrorists on his face. In spite of being grievously injured, he continued to engage the remaining terrorists holed up in the house till he became unconscious thus giving an opportunity to others to take position of advantage. Nk Gawade was evacuated to 168 Military Hospital and later to 92 Base Hospital, where he succumbed to his injuries on 22 May 2016 at 0855 hours.

Naik Gawade Pandurnag Mahadev displayed raw courage act of gallantry even in the face of mortar danger to own safety and gave a breakthrough by eliminating on terrorist which further led to elimination of five hardcore terrorists.