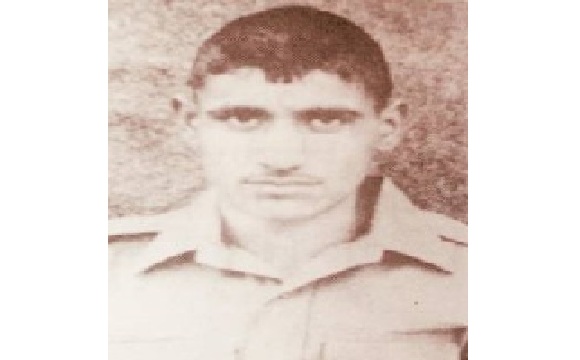 Naik Ganga Ram hailed from Peenglod village in Kishangarh tehsil of Ajmer district in Rajasthan and was born on 05 Feb 1963. He wanted to serve in the Army like many young men of Rajasthan and joined the Indian army after completing his school education. He was recruited into the 10 Para battalion of the Parachute Regiment, an infantry Regiment well known for its brave soldiers and various daredevil operations.

During Oct 1987, Naik Ganga Ram's unit 10 Para got deployed in Sri Lanka as part of IPKF operations.  The IPKF launched its first operation on 9 October 1987, after formulating a multi-pronged strategy to take on LTTE. Code-named Operation Op Pawan, it was expected to neutralize LTTE operational capability in and around Jaffna. This included the capture or neutralization of the LTTE’s chain of command, which was expected to leave the rebel movement directionless in the face of the impending assault on the LTTE strongholds by the IPKF.  On 10 October 1987, Intelligence inputs suggested that the LTTE leadership, which included not only Prabhakaran but also his deputies like Mahatiya and local military commanders were going to attend a meeting at their tactical HQ at Kokkovil in the Jaffna University campus on the night of October 11th.

The Army decided to utilize this opportunity of capturing them all and cut short the bitter fighting that lay ahead for the capture of Jaffna.  A Special Helicopter Borne Operation (SHBO) was planned in which troops would be dropped at Jaffna University. The troops would try to capture the LTTE Top leaders in a lightning strike and bring to an end the resistance of the LTTE. The SHBO was planned to be carried out on the night of Oct 11/12, when the Helicopter force would have to heli-drop IPKF Troops in the football ground in the Jaffna University Campus. The Troops allocated for the mission were 120 Commandos from 10 th Para Commando and about 360 Troops from the 13th Sikh LI.

Soon after the 13 Sikh LI  battalion touched down at the Palai airfield on 11 October 1987, it was tasked to undertake a heliborne operation the same night, drop behind enemy lines and secure the enemy headquarters around Kokkovil. The Battalion, minus two companies, which had landed, was to fly out in 14 sorties commencing 2300 hours. Delta Company, under Major Birendra Singh, was to move in the first wave, take over the helipad from a team of 10 Para Commandos and secure it for the subsequent landing of the battalion.  On 12th October, 1987, Naik Ganga Ram and his comrades from 10 Para and 13 Sikh LI rifle platoon, were heli-landed deep into the militant's stronghold in the Kokkovil area. Immediately on landing, they were heavily surrounded and came under very effective and extremely intense automatic fire. However Naik Ganga Ram without caring for his safety, entered the building from where the militants were launching grenades. In the ensuing hand to hand fight, Naik Ganga Ram displaying commendable courage and daredevilry, killed three militants but in the process received multiple gunshots and was martyred.
Besides Naik Ganga Ram, the other 5 fallen soldiers from 10 Para(SF) included Naik Babu Lal, Naik Lakhmi Singh, Naik Umesh Pandey, Naik Manohar Singh Rathore, Ptr Manuwa Kujur. Naik Ganga Ram displayed outstanding courage and devotion to duty and laid down his life at the age of 24 years in the line of his duty. He was awarded “Vir Chakra”, on 26 Jan 1988 for his exceptional courage, determination and supreme sacrifice.

Naik Ganga Ram was deployed in Sri Lanka as part of the Indian Peace Keeping Force. He was part of the assault team tasked to raid and destroy the militants Headquarters in the heart of Jaffna town on 12th October, 1987. Unmindful of his personal safety, he entered the building from where the militants were launching grenades. In the ensuing hand to  hand fight, this Non commissioned officer full of ferocity and courage, killed three militants but in the process made the supreme sacrifice of his life.

Naik Ganga Ram displayed conspicuous courage and valiant leadership in the face of the militants.