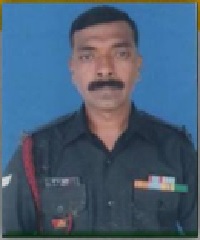 Naik Dipak Kumar Maity hailed from Masagram village in West Midnapore district of West Bengal. Naik Dipak Maity had joined the army in 1997 and was recruited into the Regiment of Artillery, an important combat support arm of Indian Army. By 2017, Naik Dipak Kumar had completed around 20 years of service and had worked in various operational areas.

During 2017, Naik Dipak Kumar’s unit was deployed in J&K and was engaged in counter insurgency operations. On the 03 June 2017 an army convoy had set off from Udhampur to undertake operations in Srinagar. Naik Dipak Kumar was part of the team that was travelling in this convoy. When the convoy reached lower munda area about 70 kms from Srinagar along the national highway in Qazigund town in Anantnag district, it was attacked at around 11:15 am by militants in a pre-planned move. The militants were hiding in safe places behind the bushes and used automatic weapons to attack the convoy.

The troops though taken aback swung into action and launched a counter attack. A fierce gun battle ensued thereafter with heavy exchange of fire. But during the exchange of fire six soldiers got seriously injured and were evacuated to the Military Hospital at Badamibag in Srinagar. However Naik Dipak Kumar and Gunner Manivannan G later succumbed to their injuries and were martyred. Naik Dipak Kumar Maity  was a dedicated and disciplined soldier who laid down his life in the service of the nation.