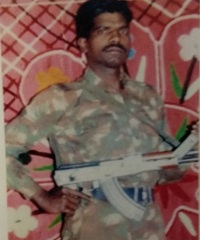 Naik Dileep peerappa Potaraj was born on 1st may 1965 in Gadyal village in Jamkandi Taluk of Karnataka. His Parents were Thirappa and Bhagavva. Dileep was younger among 7 siblings, he had one elder sister  and five elder brothers. Naik Dileep peerappa Potaraj  received his high-school education from his home town. He was a sincere, obedient, honest and hardworking child ever since his school days. After finishing his school, his passion to join the Armed Forces led him to join Indian Army  in 1981 and later was commissioned into the 6 Guards Regiment.

Dileep got married to Mayawathi and the couple had two kids. Dileep Peerappa had rendered his service in many places in his 18 years of service.

On the night of 10th July 1999, On the peak, the Pak soldiers had rooted themselves in the interconnected bunkers carved out of boulders. As a result, they were quite immune to even artillery fire. After being pinned down for a long time at a stretch by the ferocious and continuous firing, Without showing any regard of any kind for his own safety, Naik Dileep peerappa Potaraj was hit by numerous bullets. In a sacrifice that falls unmatched, he continued to fight till his last breath and refused to be rescued. He kept fighting heroically until he finally succumbed to his injuries on the battlefield.