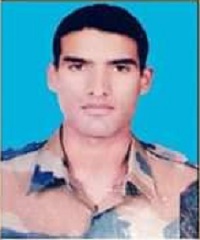 Naik Deepak Nainwal hailed from Kanchula village in Chamoli district of Uttarakhand. Son of Shri Chakradhar Nainwal and Smt Parvati Devi , Naik Deepak had joined  the Indian Army after completing his education. He was recruited into 1 Mahar of the famed Mahar Regiment, a regiment of the Infantry known for its fearless soldiers and numerous battle honours.

After serving for some time he got married to Ms Jyoti and the couple had a daughter Lavanya and a son Reyansh. He served with his parent unit for few years and later was deputed to serve with 1 RR battalion deployed in J & K for counter-insurgency operations.

During  2018, Naik Deepak Nainwal’s unit was deployed in Kulgam district of J & K and was engaged in operations against the militants on a regular basis. On 10th April 2018, information was received from the intelligence source about the presence of terrorists at a house in Wani Mohalla in Khudwani village of Kulgam district of J&K. Based on the information a decision was taken by the security forces to launch an operation to flush out the terrorists. The operation was launched by a joint team of 1 RR battalion of the Army, Special Operation Group(SOG) of J & K Police and CRPF at around 11:30 pm.

The joint team swung into action and the suspected area was cordoned off. On being challenged the terrorists fired at the troops and a fierce gun battle ensued thereafter. The gun battle continued for over 12 hours till the morning of 11 Apr 2018. However, during the heavy exchange of fire Naik Deepak Nainwal got hit in his spine area and sustained serious injuries. Initially he was shifted to Delhi’s Army Research and Referral hospital for treatment and later he was transferred to a military hospital in Pune, for further specialized care. However, Naik Deepak Nainwal lost the battle for life and succumbed to his injuries on 20 May 2018. Naik Deepak Nainwal was a fearless and committed soldier who laid down his life in the service of the nation. Naik Deepak Nainwal’s wife Smt Jyoti took the tragedy in her stride and decided to take his legacy forward by joining the army. Her dream finally came true on 20 Nov 2021, when she passed out of OTA Chennai as a commissioned officer of Indian Army.

Your youth, your energy your care the country shall miss! Your discipline, your devotion, and valor the Mahars shall miss! You Companionship, your fun-loving nature your friends shall miss! But I…have some things to write….for I don’t miss them…..I remember them I remember how you held me close to you…warmth of your hands the security of your arms! I remember…. How you would have laughed with me when I made silly faces, how you teased me about going back now and then .remember how when I cried…you were concerned and you did everything To have my smile back on my face… I remember how you told me to be a free bird in the sky…and go beyond Where you have not been to… I remember you told me to take care of mamaa and brother when you left Not thinking about family or friends, you went to ensure all of them remain happy!

Fearless and Positive about the outcome…..you took the wounds like flowers! Oh, it must have hurt papa! I remember thinking it makes me hurt…. I remember what it was like when the news came…I remember because I felt hurt, pained, paralyzed yet proud…when I paid my final salute to you! You suffered; she was not quick, I remember…and it all went on… Till she won over you…..I know now how I shall remember it! I remember it now and I shall remember if for the lifetimes ahead! That you sacrificed yourself to let other daughters have their fathers, You did it because you wanted them all to have a future, a bright one! You did it for it was your duty, you did it for it was your passion….I remember faint but you smiled, when you went away knowing that the country was safe…. Cause, I still remember….Papa and I am taking care of Mamaa and bhai for you and I will take care of the motherland too!.