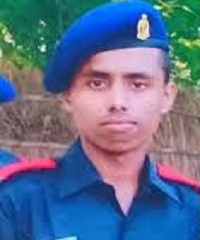 Naik Deepak Singh hailed from Farunda village in Rewa district of Madhya Pradesh and was born on 15 Jul 1989. Son of Shri Gajraj Singh and Smt Saroj Devi, Naik Deepak Singh joined the Army in the year 2012 at the age of 21 years. He was recruited into the Army Medical Corps, an important corps that provides medical services to the Indian Army during the war as well as peace.

After serving for some years he got married to Ms. Rekha Singh, on 30 November 2019. After completing his training he served in various Army hospitals which included Army Base hospital, 426 Field Hospital and 414 Field Hospital. On 30 Jan 2019, Naik Deepak Singh got posted to 16 Bihar battalion, deployed in Ladakh.

Considering the gravity of the situation, Col Santosh Babu the Commanding Officer of 16 Bihar battalion deployed in the area decided to lead the negotiations. However, an altercation during the discussion raised the tempers leading to a scuffle. Soon the scuffle turned into a violent clash with the Chinese soldiers attacking Col Santosh Babu and his men with deadly clubs and rods. The Indian soldiers were greatly outnumbered and the Chinese soldiers seemed to be prepared for the attack. As the clashes escalated, Naik Deepak Singh and other soldiers joined the beleaguered Indian troops to take on the Chinese soldiers. Naik Deepak Singh, a medical assistant, saved the lives of more than 30 Indian soldiers by administering timely treatment during the seven-hour deadly conflict near Patrol Point-14. The clashes went on for many hours during which many Indian soldiers including Nk Deepak got seriously injured. Hav K Palani, the CO, Col Santosh Babu, and 18 other soldiers later succumbed to their injuries and were martyred. The other brave hearts included Hav K Palani, Nb Sub Mandeep Singh, Nb Sub Nanduram Soren, Nb Sub Satnam Singh, Hav Bipul Roy, Hav Sunil Kumar, Sep Ganesh Hansda, Sep Ganesh Ram, Sep Chandan Kumar, Sep CK Pradhan, Sep Gurbinder Singh, Sep Aman Kumar, Sep Kundan Kumar, Sep Rajesh Orang, Sep KK Ojha, Sep Jai Kishore Singh, Sep Gurtej Singh, and Sep Ankush. Naik Deepak Singh was a valiant and dedicated soldier who laid down his life at the age of 30 years in the line of his duty. Naik Deepak Singh was given the gallantry award, “Vir Chakra” on 26 Jan 2021 for his exceptional courage, devotion to duty, and supreme sacrifice.

Naik Deepak Singh is survived by his father Shri Gajraj Singh, mother Smt Saroj Devi and wife Smt Rekha Singh. His wife Smt Rekha Singh carrying forward the legacy of her husband decided to don the Army uniform and joined the prestigious OTA Chennai in May 2022.