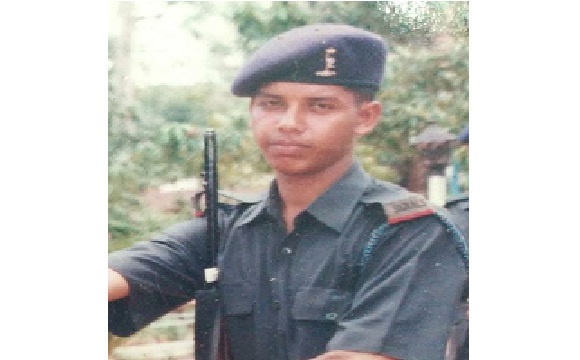 Naik Biswajit Karmakar hailed from Aranghata village of Nadia district in West Bengal and was born on 05 May 1984. Son of Shri Karuna Karmakar and Smt Gouri Karmakar, he had two elder sisters Shyamal Karmakar and Sanaka Karmakar as his siblings. He was always fascinated with Army life since his younger days and eventually got selected to join the Army in the year 2002 at the age of 18 years. He was recruited into the Corps of Signals, the arm which provides military communication to the Army during peace as well as war. After completing his training at Jabalpur, he got posted to the Kashmir valley as his first assignment.

Thereafter he served in various operational areas and developed into a professionally competent and dedicated soldier. In the year 2009, he got selected for the UN Mission in Sudan as part of the Indian contingent of UN Peacekeeping Force. After returning from the UN assignment he got posted to various field units in the North East , Ladakh and Punjab. After serving for some years he got married to Ms Soumita in the year 2013. In the year 2019, he was serving with the unit located at Bhatinda in Punjab. Unfortunately on 16 Nov 2019, Naik Biswajit Karmakar suffered a massive heart attack and left for his heavenly abode at the age of  35 years.