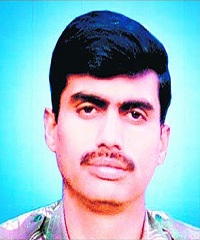 Regiment: The Regiment of Artillery

Naik Dattatraya Krushna Bhosle (29) was resident of Dabewadi village in Satara district, Maharashtra. He was born in the veteran’s family of Bholse; his grandfather also served in Armed forces and was martyred in 1971 war. As per the tradition of their village, one man should join the army form each house. So, from Bhosle’s house he had joined army and inducted into 103 Engineering Regiment. He was fondly called as ‘Raju’ among his friends.

During 2004, Naik Dattatraya Krushna Bhosle was posted at Line of Control area with his unit. His unit  was deployed in Op Rakshak at Poonch sector , which was very often attacked by the terrorists. On 7th July 2004, when he was leading a patrol party, his team came under a mine blast while patrolling along LoC. Naik Bhosale was very badly injured in the mine blast and finally succumbed to the injuries. He laid down his life for the safety and security of the nation. Naik Dattatraya Krushna Bhosle had served twelve years in the army.

Naik Dattatraya Krushna Bhosle is survived by his wife Sunanda and son Aryan.

A memorial in the rememberance of  Naik Bhosale Dattatray Krushna has been erected in his village Dabewadi, Satara.