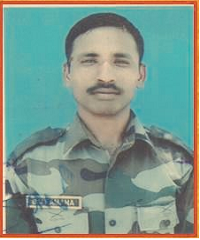 Naik Bhoota Venkata Ramana hailed from Kancharapalem in Visakhapatnam district of Andhra Pradesh. Son of Sri Kunchaiah and Smt Ramulamma, Naik Ramana joined the army at a very young age in the year 1999. He was recruited into 16 Madras of the famed Madras Regiment, a regiment known for its numerous battle honours and courageous soldiers.

By 2017, Naik Ramana had put in around 18 years of service and had served in various operational areas with different terrain and working environment. During 2017, Naik Ramana’s unit was based in Kupwara district in J & K along the LOC. served for 18 years. He belonged to 16 Madras Regiment. He was married to Anitha and the couple had a daughter Chinmay and a son Ganesh. Naik Ramana’s younger brother Appala Raju was also serving in the Indian Army during 2017.

During 2017, Naik Bhoota Venkata Ramana’s unit was based in the Army garrison located at Panzgam in Kupwara district, about 120 km from Srinagar. Kupwara is one of the most frequented infiltration routes used by militants to cross the Line of Control, especially after the snow starts melting. On 27 Apr 2017, three armed militants descended down the wooded mountains and tip-toed towards the Army garrison at Panzgam at 4.30 am. They hurled grenades and started indiscriminate firing after cutting through two barbed wire fences from the rear side of the camp. When they began cutting the fence, soldiers on duty noticed the suspicious activity and challenged them. The three militants taken by surprise fired at the guards and tried to rush towards the living quarters.

Capt Ayush Yadav from 310 Med Regt was woken up by the deafening sound of gunfire and sensed something ominous. He threw his blanket away, grabbed his AK 47 and rushed out. Capt Ayush Yadav engaged the terrorists and didn’t allow them to proceed towards the living quarters. This provided the crucial time for the quick reaction team to organize themselves and take on the terrorists. A fierce gun battle ensued thereafter wherein two terrorists were eliminated. However, Sub Bhoop Singh and Naik Bhoota Venkata Ramana got severely injured during the exchange of fire and later succumbed to their injuries. Capt Ayush Yadav also succumbed to his injuries and was martyred along with these brave hearts. Naik Bhoota Venkata Ramana was a gallant and committed soldier who laid down his life in the service of the nation.