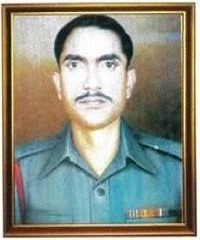 Naik Bhawani Datt Joshi’s first brush with adversaries came as early as in 1971 when his battalion was engaged in the Eastern Sector during the war with Pakistan and Nk Joshi performed his duties with full dedication there. Later, he got posted to 9 Garhwal Rifles. On the night of the 5th/6th June 1984, during Operation ‘Blue Star’, Nk Joshi’s company had been given the task of gaining a foothold in an important complex of a building. The building complex had been heavily fortified and was strongly held by highly motivated terrorists and the gate properly closed and blocked by them. Therefore, the gate had to be opened up. As soon as a hole was made in the gate, a very heavy volume of fire came on Nk Bhawani Datt Josh I ’s platoon thereby seriously hampering the progress of the operation.  At this juncture, the Commanding Officer asked for volunteers to tackle the terrorist positions. Nk Bhawani Datt Joshi volunteered to undertake the mission. Totally unmindful of the obvious danger and without caring for his personal safety, Nk Bhawani Datt Joshi personally led his section in this operation. He killed one of the terrorists with his carbine and bayoneted another to death thereby clearing the way for his platoon to capture its objective. Even though he was already injured, he pounced upon another terrorist who was firing from behind a cover but in the process, he was mortally wounded. Because of the cool courage displayed by Nk Bhawani Datt Joshi, his company successfully captured Its objective.

During operation Blue Star in June 1984, Nk Bhawani Datt Joshi displayed most conspicuous bravery, resolute determination, cool courage and devotion to duty of an exceptionally high order and laid down his life in the highest traditions of the Army for which he was awarded with Ashoka Chakra posthumously.