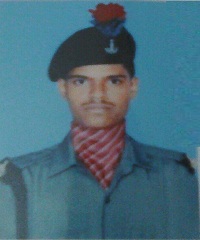 Lance Naik Bharat Maske hailed from the Belgaum district of Karnataka and was born on 18th February 1972. Son of Shri Baban Narayan Maske and Smt Padmavati, he had an elder brother and a sister as his siblings. After completing his school education he joined the Indian army on  27th August 1990 at the age of 18 years. He was recruited into the 5 Maratha LI battalion of the Maratha Light Infantry Regiment, an infantry Regiment well known for its fearless soldiers.

After completing his training he got posted to Ladakh and took part in operations as part of "Op Rakshak". In the year 1997, he got posted to the North-East and participated in operations as part of "Op Hifazat". After serving for a few years, Lance Nk Maske got married to Ms. Lakshmi and the couple was blessed with two sons. Later he was deputed to serve with the 17 RR battalion deployed in J & K for counter-insurgency operations.

During 1999 Lance Naik Bharat Maske’s unit 17 RR was deployed in the Poonch sector of J&K. The unit troops were engaged in counter-insurgency operations on a regular basis as its AOR (Area of Operation) was affected by active militancy. Though the Kargil war was going on at that time, the militancy had not subsided and the troops of 17 RR battalion were constantly on high alert. On 20 July 1999, after getting specific intelligence about the presence of militants, the troops of 17 RR battalion launched a search and cordon operation in the suspected area in its AOR(Area of Responsibility). Lance Naik Bharat Maske was part of the team that was entrusted with the task of taking on the militants.

On being challenged, the militants fired at the troops and a fierce gun-battle ensued. During the operation Lance Naik Bharat Maske  got severely injured in the exchange of fire. He was later shifted to the hospital, where he  succumbed to his injuries and was martyred.  Lance Naik Bharat Maske was a valiant and dedicated soldier, who at the young age of 27 years, laid down his life in the service of the nation.  He was given the gallantry award, “Sena Medal” for his exceptional courage, devotion to duty, and supreme sacrifice.