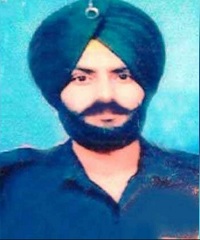 Naik Bakhtawar Singh was married to Jasbir Kaur and they had two sons and one daughter.

On the early morning of Friday, on 16th June 2017, around 5.15 am, there was an unprovoked firing sound was heard in Nowshera area. Immediately army troops were rushed out to the place and then they realized that the Pakistani troops had attacked their place. However, Indian Army retained strongly and effectively to the Pakistan’s unprovoked firing. During this action,Naik Bakhtawar Singh was grievously injured by the gun fire and he was evacuated to the Military Hospital. Later, he succumbed to injuries and made supreme sacrifice for his mother land.