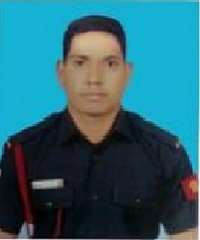 Naik Ajit Kumar Sahoo hailed from Badasuala village in Kamakhyanagar block of Dhenkanal district in Odisha. Son of Shri Santosh Sahoo, Naik Ajit Kumar joined the army in the year 2015. After serving for a few years with his parent unit, he was deputed to serve with 44 RR battalion, deployed in J&K for counter-insurgency operations.

During 2019, Naik Ajit Kumar’s unit,  44 RR was deployed in the Pulwama district of J&K. During this period a number of insurgent groups were active in J&K, who were hostile to the security forces and often carried out pre-planned attacks on them. The Army units deployed in the region maintained a very high state of alert at all times and launched counter-insurgency operations based on intelligence reports. On the 17 of June 2019, Naik Ajit Kumar Sahoo and his comrades of 44 RR were tasked for an operation that needed them to move by road in a convoy.

As planned Naik Ajit Kumar along with his fellow soldiers set off to the operational location in the early morning of 17th June. As the convoy reached the Arihal area of South Kashmir’s Pulwama district, the militants in the pre-planned move attacked the convoy by an IED blast. The blast was unexpected and powerful to cause devastating damage. Naik Ajit Kumar and five other soldiers got seriously injured in the blast. The troops immediately launched the counter operation to sanitize the area and made arrangements to shift the injured soldiers to the Military hospital. However, Naik Ajit Kumar later succumbed to his injuries on 18th Jun and was martyred.

Naik Ajit Kumar was a gallant soldier who laid down his life at the age of 27 years in the service of the nation. Naik Ajit Kumar is survived by his parents.