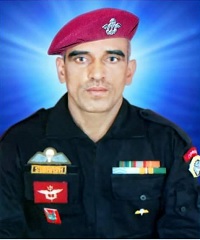 Naib Subedar Subhash Chandra hailed from Bhairupura village in Sikar district of Rajasthan and was born on 1st Dec 1965. Son of Shri Laxman Singh and Smt Sundar Devi, Nb Sub Subhash completed his school education from Shri Raghunath Vidyalaya in Laxmangarh. After completing his schooling, he joined the army in 1986 at the age of 21-years. He was recruited into 10 Para of the Parachute Regiment, an elite Infantry regiment known for its daredevil operations.

After serving for a few years, he married Ms.Vimala Devi and the couple had two sons Surendrapal & Vijendra Singh and a daughter Sumitra. As part of the 10 Para (SF) battalion, he took part in various operations and proved his mettle as a soldier. During his service, he participated in Sri Lankan operations during Op Pawan and also in Kargil War as part of Op Vijay. By the year-2007, he had been promoted to the rank of Naib Subedar and had completed over 20-years of service in the army. Nb Sub Subhash Chandra had by then developed into a tough soldier and professionally competent Junior Commissioned officer.

Nb Sub Subhash Chandra and his comrades reached the suspected area in Bandipora as planned and launched a search and cordon operation. Shortly the troops made contact with the dreaded militants who opened fire on being challenged, resulting in a fierce gun battle. Nb Sub Subhash Chandra led from the front and engaged the militants displaying gallantry of a very high order. The troops managed to eliminate two militants including the district commander of the outfit. However, during the heavy exchange of fire, Nb Sub Subhash Chandra received multiple gunshots and was seriously injured. He later succumbed to his injuries and was martyred. He was given the gallantry award “Sharya Chakra” for his extraordinary courage, fighting spirit, devotion to duty and supreme sacrifice.