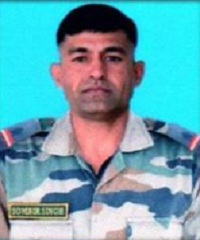 Naib Subedar Sombir Singh belonged to the Mithi village of Siwani Tehsil in the Bhiwani district of Haryana. After completing his school education he joined the army in the year 2001. He was recruited into 8 Jat Bn of the Jat Regiment, an infantry regiment with a rich history of bravery and battle honours. By 2019, Nb Sub Sombir Singh had completed nearly 18 years of service and had had the experience of operating in various insurgency-affected areas.

During 2019, Naib Subedar Sombir Singh’s unit 8 Jat Bn was deployed Kulgam district of Jammu and Kashmir. As the AOR (Area of Responsibility) of the unit was severely affected by the militant’s activities, the unit troops had to undertake operations against the militants on a frequent basis. One such operation was launched on 24 Feb 2019 by the unit, based on the information from the intelligence sources about the presence of the militants in its AOR. Nb Sub Sombir Singh was made part of the team that was tasked to undertake this operation.

As planned Nb Sub Sombir Singh and his troops reached the suspected area in Turigam village of the Kulgam sector. As the search and cordon operation was underway the militants felt threatened and fired at the troops. A fierce gun-battle followed thereafter with a heavy exchange of fire from both sides. Nb Sub Sombir Singh was constantly directing his soldiers to tighten the cordon around the militants and block the possible escape routes.  However, during the operation, Nb Sub Sombir Singh got hit by two bullets and was seriously injured. He was immediately shifted to the 92 Base Hospital, but unfortunately, he later succumbed to his injuries and was martyred. Nb Sub Sombir Singh was a fearless and committed junior commissioned officer who laid down his life in the line of his duty.