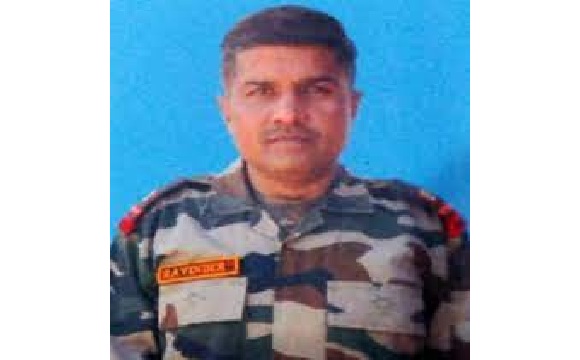 Naib Subedar Ravinder Jakhar from Salhawas village in Jhajjar district of Haryana. Son of an army veteran Meer Singh Jakhar and Smt Sheela Devi, Nb Sub Ravinder always wanted to serve in the Army like his father, who served with the Army Supply Corps of Indian Army. His grandfather Sheo Chand Jakhar too served in the Army making Nb Sub Ravinder a third generation soldier. His elder brother Subedar Jitendra Jakhar, is also serving with the Grenadiers Regiment of Indian Army.  He eventually joined the Army after completing his school education in the year 1998 at the age of 19 years. He was recruited into 16 Grenadiers of the Grenadiers Regiment, an infantry Regiment known for its brave soldiers with a rich history of various battle honours.

After serving for few years, he got married to Ms Rajwanti Devi and the couple had two sons Nitin and Kartik. In the year 1999, he also participated in Kargil War as part of "Op Vijay". By the year 2021, he had put in over 23 years of service and had been promoted to the rank of Naib Subedar. By that time he had served in various challenging operational areas and developed into a tough soldier and dependable Junior Commissioned Officer.

During Jan 2021, Nb Sub Ravinder Jakhar‘s unit 16 Grenadiers was deployed in Rajouri district of J&K. The unit troops were manning the forward posts in the Nowshera sector along the LOC.  The LOC remained highly active and volatile with ceasefire violations occurring very often and without any warning. Besides manning the forward posts, the unit also launched regular armed patrols to check any infiltration from across the border. Like the previous years, the year 2021 started with ceasefire violations. Pakistan continued to violate the 2003 ceasefire agreement with India despite repeated calls for restraint and adherence to the pact during flag meetings between the two sides.

In yet another case of ceasefire violation, Pakistani troops opened unprovoked fire in Nowshera sector along the LOC on on 01 Jan 2021. Around 3.30 p.m., Pakistan initiated unprovoked ceasefire violation by firing with small arms and shelling mortars along the LOC in Nowshera.  Around 5.30 p.m., Pakistan again initiated unprovoked ceasefire violation. Indian troops responded strongly to the enemy fire, triggering heavy exchange of fire. However, Nb Sub Ravinder who was supervising response of forward posts, got critically injured during the exchange of fire. He later succumbed to his injuries and was martyred. Nb Sub Ravinder Jakhar was a valiant soldier and committed JCO, who laid down his life in the line of his duty.