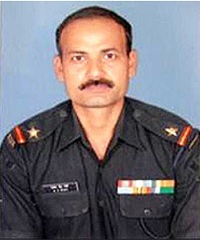 Nb Sub Rajendra Singh Rana was posted to 20141 Utility Helicopter Flight of  Army aviation corps. He was a very disciplined and diligent soldier who was liked and admired by everybody.

Naib Subedar Rajendra Singh Rana along with 3 other army personnel was onboard a helicopter of his unit which was flying in Sikkim area. However, after approximately an hour of its takeoff, it became untraceable and went missing. The helicopter went missing during a routine training exercise while flying over north Sikkim near the Chinese border.

The Advance Light Helicopter ‘Dhruv’ of Army Aviation Corps had taken off from the Sewak Road Base in Siliguri in West Bengal, from where the Army conducts its routine training exercise to Sikkim’s borders with China, at 10.30 am. It lost radio contact around 11.30 am. The Army launched a massive search operation but after about five hours, the search was postponed due to inclement weather. The wreckage of the helicopter was found the next day when the search operation commenced again. All four people on board, two jawans and two officers including Naib Subedar Rajendra Singh Rana, were found dead.

Naib Subedar Rajendra Singh Rana laid down his life in the service of the nation. His hardworking attitude and dedication to duty will continue to inspire one and all.