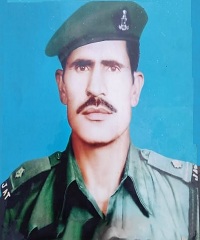 Naib Subedar Nafe Singh hailed from Jhajjar district of Haryana and was born on 16th Nov 1943. He joined the Army on 16th Nov 1962, at the age of 19 years and was recruited into 11 Jat of the well known Jat Regiment, a Regiment widely respected for its gallant soldiers and numerous battle exploits. Nb Sub Nafe Singh during his service career spanning over two decades participated in numerous operations and proved his mettle as a brave and a committed soldier. As an acknowledgment of his meritorious service, Nb Sub Nafe Singh received various medals including Raksha medal, Sainya Seva medal with clasp (B&A), Sangram medal, Paschim star, 25th independent anniversary medal and 20 yrs long service medal.

Naib Subedar Nafe Singh had three sons and one daughter. His sons followed into the footsteps of their father and so much so that two of his sons joined the Army into their father ‘s battalion 11 Jat. His middle son Sub Ramesh Kumar from 11 Jat was also martyred during operation Rakshak on 9th Oct 2010 in the Tangdhar sector in Kupwara district of J& K. The younger son Sub Mukesh Kumar also from 11 Jat,  following his family’s tradition displayed gallantry and was awarded, “Sena medal” for his courage, grit and resoluteness. His elder son Randhir Singh is employed with the Air Force Central Medical Establishment based at Delhi.

By 1986, Nb Sub Nafe Singh had put in over twenty-three years of service in the Army and had evolved into a battle-hardened and committed soldier who was respected by his seniors and juniors as well. By then he had also been promoted to the rank of Nb Sub and become a junior commissioned officer commanding quite a few men under him.

As part of the ongoing Op Meghdoot launched in April 1984, Nb Sub Nafe Singh joined the troops deployed in Saltoro ridge of the Siachen Glacier. At the end of the UN-brokered ceasefire in 1949, India and Pakistan agreed on a ceasefire line (CFL) in undivided Kashmir as per the Karachi Agreement of 1949. The easternmost stretch of the ceasefire line was not demarcated beyond a point called NJ9842 since it was inhospitable and uninhabited. It simply said that from NJ9842, the line would run “thence North to the glaciers”. The 1949 ceasefire line was re-validated as the Line of Control (LoC) by the Suchetgarh Agreement of December 1972, in accordance with the Simla Conference. The LoC closely assimilated military advances made by either side in J&K in the 1971 war but did not make any changes to the line beyond NJ9842. Uninhabited, the area was considered beyond the ambit of any military operations by both sides. But between 1964 and 1972, Pakistan began depicting the ceasefire line as extending from NJ9842 to a point just west of the Karakoram Pass, not northwards as the agreement said and the dispute of Siachen began taking serious dimensions.

Consequently, Op Meghdoot was launched on 13 Apr 1984. At 5.30 am on April 13, the first Cheetah helicopter, carrying Capt Sanjay Kulkarni and one soldier, took off from the base camp. By noon, 17 such sorties were flown and 29 soldiers were heli-dropped at Bilafond La. Soon, the weather packed up and the platoon was cut off from the headquarters. The contact was established after three days, when five Cheetah and two Mi-8 helicopters flew a record 32 sorties on April 17 to Sia La. The two main passes were sealed off and an area of approximately 3,300 sq km, illegally claimed as part of PoK was brought under India’s control. The Indian troops were deployed in large numbers along the Saltoro ridge and Nb Sub Nafe Singh too joined them during 1986.

The soldiers had to face very hostile weather conditions along with unprovoked firing by Pakistani soldiers. With sub-zero temperatures and unpredictable snow blizzards/avalanches the patrolling the area was very challenging and risky.  On 13 Mar 1986, one such patrol was launched under the leadership of Nb Sub Nafe Singh. While leading the patrol Nb Sub Nafe Singh got trapped and buried under snow due to an avalanche triggered by enemy firing. A massive rescue operation was launched but Nb Sub Nafe Singh could not survive and was martyred. Nb Sub Nafe Singh was a dedicated soldier and determined JCO who laid down his life in the service of the nation. Nb Sub Nafe Singh was given the gallantry award, “Sena Medal” for his courage, devotion to duty and supreme sacrifice.

This profile is currently being maintained by Rohit Khasa and his mai id is roykhasa25@gmail.com.   We would invite the family members, unit/formation or former colleagues of this brave soldier to contribute additional information and maintain this memorial site as well, thereby assisting us in our endeavour to spread awareness about this great Indian and inspire future generations.