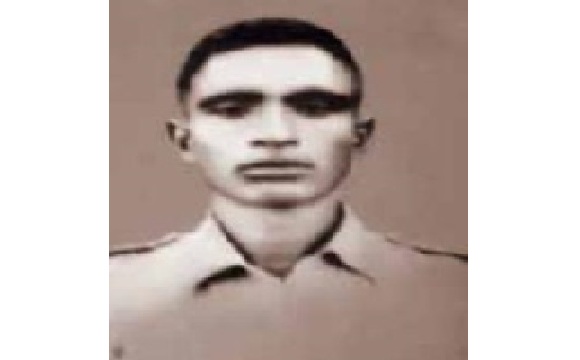 Place of birth : Meerut Dist (UP)

Naib Subedar Mam Chand Sharma hailed from Bubakpur village of Meerut District in Uttar Pradesh and was born on 6 July 1930. Son of Shri Kishori Lal and Smt Basanti Devi, he joined the Army after his initial school education. He was recruited into 10 Mahar Battalion of the Mahar Regiment, an infantry regiment founded in 1941 with a glorious history of gallantry in various operations.

The 10th Battalion was raised as a Machine Gun Battalion at Saugor on 15 November, 1962. On 1 Sep 1963, the battalion was converted to a standard infantry battalion and re-designated as 10th Battalion, the Mahar Regiment. It formed part of 52 infantry Brigade for the capture of Muhadipur on Chhaprar-Sialkot axis on night of 17-18 Sep 1965 during the 1965 war. The battalion captured the villages of Muhadipur and Tilakpur despite intense shelling, repulsed repeated fierce counterattacks by Pakistani forces. 10 Mahar battalion was conferred with Battle Honour "Tilakpur-Muhadipur" and Theatre Honour "Punjab 1965" in recognition of the splendid operation performance. By the year 1971, Nb Sub Mam Chand Sharma had put in substantial years of service and had evolved into a gritty and dependable Junior Commissioned Officer.

Though the war with Pakistan actually commenced on 03 Dec 1971, when Pakistani Air Force attacked Air Bases of India, the border skirmishes were going on much before that and Nb Sub Mam Chand Sharma’s unit was involved in one such operation on 29/30 Nov 1971.  During that period, 10 Mahar battalion formed part of 81 Mountain Brigade deployed in Shamsher Nagar of erstwhile east Pakistan.  The Mahar Regiment was given the task of capturing an enemy position, a tea factory at Chatlapur on the Eastern Front, which was a well-fortified building dominated by machine guns around the entire area. Nb Sub Mam Chand Sharma as a platoon commander was part of the assault force that was assigned the task.

The enemy was occupying well fortified positions and was supported by Medium Machine Guns. Nb Sub Sharma led the attack with great courage with complete disregard to his personal safety. During the assault, his platoon came under heavy and accurate Machine gun fire from the upper story of a building which was inflicting heavy casualties on his platoon. Having realized the gravity of the situation, Nb Sub Sharma decided to personally lead his men and charge the machine gun post. During this charge, he received a bullet in his chest but undeterred he pressed on and finally silenced the enemy machine gun post. However, he subsequently succumbed to his injuries and was martyred on the battle field. Nb Sub MC Sharma was a gallant JCO, who led his men from the front and laid down his life in the line of his duty.

Nb Sub Mam Chand Sharma was given the gallantry “Vir Chakra” for his outstanding courage, determination, devotion to duty and supreme sacrifice.

Naib Subedar Mam Chand Sharma was commanding a platoon of a Company of a Battalion of the Mahar Regiment during an assault on an enemy post in the Eastern Sector. The enemy was occupying well fortified positions and was supported by Medium Machine Guns. He led the attack with complete disregard to his personal safety. During the assault, his platoon came under heavy and accurate Machine gun fire from the upper story of a building which was inflicting heavy casualties on his platoon. Naib Subedar Mam Chand Sharma personally led his men and charged the machine gun post. During this charge, he received a bullet in his chest but undeterred he pressed on the assault and silenced the enemy machine gun before succumbing to his wound on the battle field.