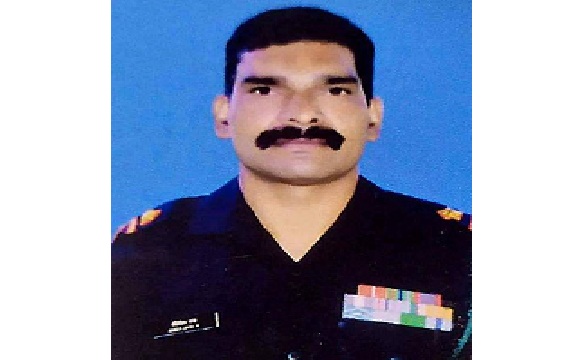 Naib Subedar Sreejith M hailed from Thiruvangoor village of Kozhikode district in Kerala and was born on 27 Mar 1979. Son of Shri Valsan Makkada and Smt Shoba Valsan, he did his initial schooling from Thiruvangoor school, Calicut and later finished his higher secondary from Devagiri college Calicut. He was fascinated with army life and nursed a dream of joining the army since his childhood. Consequently, after completing his school education he joined the army in the year 1998, at the age of 19 yrs.

He was recruited into the 17 Madras battalion of the famed Madras Regiment, well known for its intrepid soldiers and numerous battle exploits. After serving for a few years, he got married to Ms. Shejina P and the couple had a son Athul and daughter Thanmayalakshmi. In the year 2002, he was awarded, the "Sena Medal" for his gallantry, devotion to duty and meritorious service.  By 2021, he had put in around 23 years of service in the Army and had been promoted to the rank of Naib Subedar. By that time he had evolved into an experienced Junior Commissioned Officer, having served in areas with different terrain and operational environments.

During Jul 2021, Nb Sub Sreejith's unit 17 Madras was deployed in the Sunderbani sector of J & K along the LOC. The unit troops were engaged in counter-insurgency operations on a regular basis as its AOR (Area of Operation) was affected by active militancy. The LOC remained highly active and volatile with ceasefire violations occurring very often and without any warning. Besides manning the forward posts in the Sunderbani sector of the Rajouri district, Nb Sub Sreejith's unit also undertook operations to check the infiltration bids as its AOR was prone to infiltration by the militants from across the border. One more such infiltration attempt was made on 08 Jul 2021 in the Rajouri district of J&K.

On July 8, 2021, at 0650 hrs, Nb Sub Sreejith as Quick Reaction Team Commander observed the movement of two to three terrorists while searching rugged terrain. He immediately swung into action and tactically deployed his team to cordon off the area. He then engaged with the terrorists with effective fire and directed his troops to block the escape routes.  As the operation was underway, he observed two terrorists trying to break the cordon. Sensing the gravity of the situation, he in a rare display of courage crawled to the flank and brought down effective fire, eliminating one terrorist in the face-to-face gunfight. In the meantime, the other terrorists retaliated by launching a grenade attack. As a result,  Nb Sub Sreejith and one of his comrades Sep Maruprolu Jaswanth Kumar Reddy sustained multiple injuries and started bleeding profusely. Undeterred Nb Sub Sreejith refused to get evacuated and continued to fire before succumbing to his injuries. Nb Sub Sreejith was a gallant and dedicated JCO, who laid down his life in the line of his duty. Nb Sub Sreejith was given the gallantry award, “Shaurya Chakra” posthumously on 26 Jan 2022, for his commendable bravery, devotion to duty and supreme sacrifice.

On July 8, 2021, at 0650hrs, Naib Subedar Sreejith M, Sena Medal as Quick Reaction Team Commander observed the movement of two to three terrorists while searching rugged terrain. The Junior Commissioned Officer tactically deployed his team and engaged with the terrorists with effective fire, denying them to break contact and escape. Amid the intense firefight, he observed two terrorists trying to break the cordon; the Junior Commissioned Officer displaying tactical acumen, crawled to the flank and brought down effective fire, eliminating one terrorist in the face-to-face gunfight. The other terrorists retaliated with Under Barrel Grenade Launcher fire and hand grenades in which the Junior Commissioned Officer sustained multiple injuries and started bleeding profusely. Undeterred and regardless of his grievous injuries, he refused to get evacuated and continued to fire before succumbing to his injuries.

For his act of conspicuous gallantry, selfless leadership and supreme sacrifice beyond call of duty, Naib Subedar Sreejith M, Sena Medal is recommended for the award of “Shaurya Chakra".