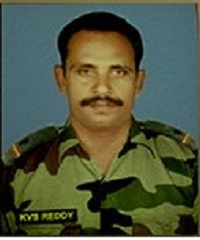 Naib Subedar Kankara Subba V Reddy belonged to the corps of Engineers and was serving with 44 RR unit during 2015. The 44 RR unit was engaged in counter-insurgency operations and was deployed in Pulwama district of J & K during the year 2015.

On 26 Oct 2015, the security forces had received credible information from intelligence sources about the presence of terrorists in Drabgam village in Pulwama district of J & K. A decision was taken to launch an operation immediately to act on the information and consequently a joint team of 44 RR unit and  Special Operations Group (SOG) cordoned off Drabgam village.

At about 1720 hrs, Nb Sub Kanakara V Subba Reddy observed the movement of two terrorists near the suspected house. He along with his buddy sepoy using the highest standard of field craft closed in towards the suspected terrorists fearlessly and challenged them. On being challenged the terrorists opened fire with their automatic weapons injuring Nb Sub Kanakara V Subba Reddy. Though bleeding profusely, in a rare show of courage and determination he retaliated with aimed fire and killed one terrorist and injured another before becoming unconscious.

Nb Sub Kanakara V Subba Reddy was shifted to 92 Base Hospital at Srinagar, but he later succumbed to his injuries and was martyred. Naib Subedar  Kankara Subba V Reddy was awarded “Shourya Chakra”, the country’s third highest gallantry award during peacetime for his sheer courage, bravery, and supreme sacrifice.