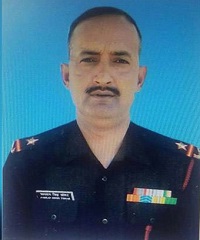 Naib Subedar Jagram Singh Tomar hailed from Tarsama village  in Morena district of Madhya Pradesh. Nb Sub Tomar was serving with 15 Mahar of the famed the Mahar Regiment of the Army. His unit was deployed in Jammu and Kashmir during 2017 entrusted with the responsibility of anti terrorists operations.

On 13 Aug 2017  Pakistan army initiated the unprovoked firing on the Indian Army posts at around 5 pm along the Line of Control in Krishna Ghati sector in Poonch district of Jammu & Kashmir. This prompted retaliatory action by Indian forces and  a heavy exchange of fire ensued. In the exchange of fire, Naib Subedar Jagram Singh Tomar, was grievously injured and later succumbed to injuries. Nb Sub Tomar was martyred but his bravery and service to the nation will always be remembered.

Nb Sub Jagram Singh Tomar is survived by his wife Omavati Devi, a son and a daughter.